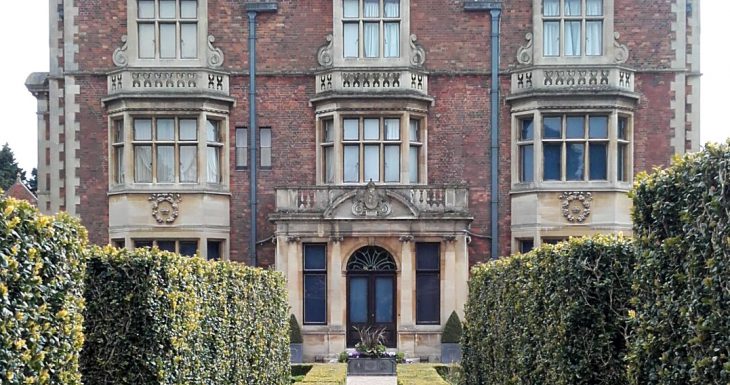 The House is perhaps the most famous stately home in Norfolk and is at the heart of the 8,000 hectare Sandringham Estate. 240 hectares of which make up the woodland and heath of the Country Park, open to the public free of charge every day of the year.

Sandringham is recorded in the Domesday Book of 1086 as “Sant Dersingham”, the sandy part of Dersingham, subsequently shortened to Sandringham. There is evidence of a residence on the present site of the House as early as 1296; prehistoric flint tools have been found in the area and there are remains of a Roman villa quite close to nearby Appleton Farm. From the 16th-century the area passed through two families, the Cobbes who held the land from 1517, and the Hostes who followed in 1686.

The House which the Prince of Wales, later King Edward VII, found at Sandringham was a plain Georgian structure with a white stucco exterior, built in the second half of the 18th-century by Cornish Henley, whose wife was a member of the Hoste family. Henley died before the House was completed and his son eventually sold it to a neighbour, John Motteux, whose ancestor had first arrived in England as a Huguenot refugee in 1685. Motteux bequeathed it in his will to his friend Charles Spencer Cowper, the stepson of Viscount Palmerston who was Prime Minister at the time.

In the spring of 1862, Sandringham House with its estate at the time of 2,800 hectares was bought from Cowper as a country home for Albert Edward, Prince of Wales, who had just turned 21. Queen Victoria and Prince Albert had decided that he should move from the family home to a house of his own.

His principal residence was to be Marlborough House in London but it was felt that he should also have a private house well away from town so that he would be able to escape when duty permitted and enjoy the benefits of a healthy country life. Many properties were inspected and the search was still in train when the tragic and premature death of the Prince Consort brought it to an abrupt halt.

However, Queen Victoria decided that everything must go on as her husband would have wished and so the Prince of Wales prepared for a visit to Sandringham. On inspection, the property was decided to be most suitable and so the purchase was concluded a few days later.

If you are a Historic Houses member you will need to pre-book a place at Sandringham before visiting. To do this, go to their booking page here: https://sandringhamestate.co.uk/tickets

To book your free place, enter the special code HHA22.

You must also present your membership card on arrival.

After King Edward VII’s death in 1910, one of his friends wrote, “Up to the last year of his life he was continually improving his domain, repairing churches, spending money on the place in one way or another.” His son, King George V, wrote, “Dear old Sandringham, the place I love better than anywhere else in the world,” and his grandson, King George VI, wrote “I have always been happy here and I love the place.” It is evident from the amount of time that the Queen and her family spend here that this affection continues as strongly as ever.