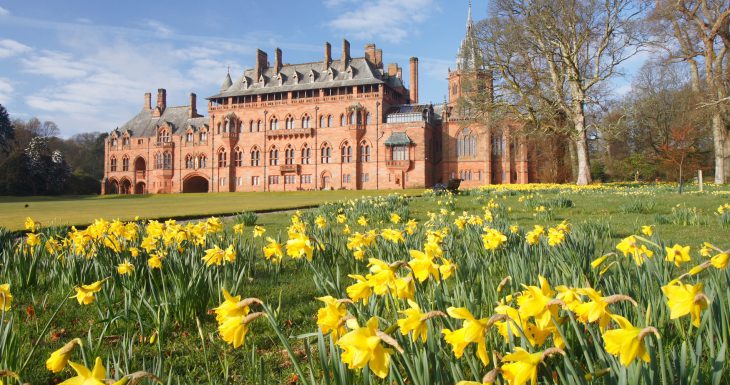 Mount Stuart’s architectural journey is a story in itself. The original house was built in 1719, but was severely damaged by fire in 1877. Most of the contents survived, along with the wings of the building. These were incorporated into the house you see today, which was built in the late 19th century. The Georgian architecture of the wings presents a striking contrast to the otherwise Victorian design, providing a completely unique architectural blend. Taking a moment to absorb the sheer beauty of the building is an unforgettable part of the Mount Stuart experience. And that’s before you’ve stepped through the door.

Inside, design inspired by astrology, art and mythology dazzles. See a map of the stars on the ceiling of the Marble Hall. Take the spiral staircase to what is believed to be the world’s first domestic heated swimming pool. This house is filled with innovations – from an early telephone system to our Victorian passenger lift.

Mount Stuart’s architectural journey is a story in itself. The original house was built from 1719, but was severely damaged by fire in 1877. Most of the contents survived, along with the Georgian wings of the building. These were retained as part of the new Mount Stuart, which the 3rd Marquess of Bute built in the late 19th century.

Wishing to bring the house up to date, the 3rd Marquess had already commissioned a significant restructure before the fire took place. Following the fire, the new build was led by Scottish architect Robert Rowand Anderson. The result was a spectacular architectural feat – a building that surpassed its predecessor in grandeur, scale, and ingenuity. A hugely impressive neo-gothic mansion . Mount Stuart was the first house in Scotland to be wired for electricty, had a lift, a heated indoor swimming pool and central heating system. All still working today!

And, with the Georgian architecture of the wings contrasting with the Victorian design, the house displayed a completely unique architectural blend.