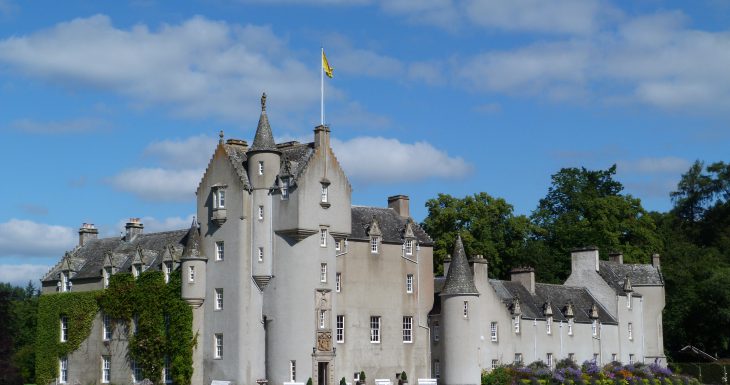 Situated on the banks of the River Avon, a short distance from its junction with the River Spey, Ballindalloch Castle has been the home of the Macpherson-Grant family since it was finished in 1546.

However, the lands of Ballindalloch and Glencairnie had been granted to John Grant of Freuchie by King James IV in 1498, though his grandfather is described as ‘Crown Tacksman of Ballindalloch’ in 1457. In turn, it was John’s grandson, also named John Grant, who began building the castle around 1542.

Constructed at a time when the Highlands were rife with clan feuds and prey to the avarice of monarchs, both English and Scottish, Ballindalloch Castle was once a fortress as well as a family home. The original castle was formed in the shape of a ‘Z’ plan, with the living quarters, a three-storey square block of stone, flanked to north and south by two high circular towers, each protecting two sides of the rectangle. The Rivers Spey and Avon formed a natural moat to north and west, and the entrance to the castle was guarded by an apparatus designed to drop stones and sewage upon unwanted visitors.

It has puzzled observers ever since that John Grant did not build his castle upon the high grounds slightly to the east. If there is a strategic or geographical explanation then it is lost. All we have is a legend. John Grant ordered his stone masons to construct a castle upon the hill, but more than once a new dawn would find the foundations turned to rubble and lying across the bed of the River Avon. Eventually John Grant determined to keep a night time vigil upon his fledgling castle, only to find himself and his stonework swept off the hill by a mighty gust of wind sweeping down from the rocky tors of Ben Rinnes, accompanied by a demonic voice imploring him to build his castle “on the coo haugh”. So it was that Ballindalloch Castle came to be sited upon the ‘cows’ meadow’ running alongside the banks of the River Avon.