His arm half-way up a bellowing cow’s backside, he’s responding to the question that’s drifted in from off-camera.  ‘I remember that journey of discovery so well — it was just as we were exiting the roundabout with the concrete cows, that icon of Milton Keynes, that I asked my dad, as every enthusiastic kid might do, how long the drive would be.

‘Never you mind about that, young man, he said — my dad was always gruff at the start of any family trip — It’ll be at least two naps, with lunch between, but when you wake up later this afternoon, the next cows you see will be real wild ones.

‘Yeah, well, I fell asleep with visions of buffalos butting their heads together, or roaming over the wild prairies in great herds — I was quite a cowboy fan, all of eight years old, and we were headed north to Northumberland, a promised wilderness.’

Off-camera voice:  ‘When did you see the wild cattle?’

‘It was actually early the next morning!  We’d got to our campsite on the Northumberland coast, and that was an incredible vista, all sandy beach and crashing waves and the huge sea, but it was too late to head off to the castle.  So we pitched our tent and had a brisk walk on the shore.   All I remember then is holding my cowboy hat against my chest as I fell asleep for the third time that day!’

He grabs the stout rope at his feet, making a half-hitch while keeping hold of the calf’s legs. ‘I’ve got to keep the tension on these, while I pull its head down to engage with the birth canal — give me a moment.’

With one arm ramrod stiff deep in the cow, he lifts the winch with his toe into his other hand and props it against her haunches, tightening with a few cranks and impressive dexterity until the tension on the emerging hooves is sufficient.

He takes a deep breath.  ‘Now then, where was I?’  A couple more contemplative cranks and the forelegs look fully extended.  ‘Ah, sorry, it’s now or never.’  His arm is  back inside, feeling for the calf’s head, smiling to himself as he huffs and puffs.  ‘That’s better, all engaged.

‘Stand back now, but keep the camera rolling, eh?’  He braces himself and begins to crank the winch vigorously.  The cow lets out an enormous wail, as the hooves inch forward.  Suddenly, with a slither and a plop, the calf is out, slathered all over the deep straw covering the floor.

He drops to his knees to wipe its mouth, to give it a little shake, and it emits a tentative cry.  He unties the knot, moving aside so the cow can find her place.  ‘Time for a wash, I think!’

The camera follows him to the sink outside, where he washes the blood and mucus from his arms in a brisk, workmanlike manner.  Grabbing a handy towel, he dries himself off while he smiles into the lens.  ‘These domesticated animals, sometimes they really need some help, but then they’re bred for their milk, not for their ease of giving birth, after all.’

‘Ah yes, of course.  Well, the herd at Chillingham is at least 800 years old, never touched by human hands, monitored only from afar, though of course they’re enclosed within the estate.  We were up early for a visit supervised by the warden, who took us stealthily along a quiet path until we got to a clearing in the morning mist.

‘There were about six of the great white beasts lying placidly on the ground, while a huge white bull paced about in front of them.  I know now, of course, that they’re not really very large cattle at all, but for a small boy they were giants.  The bull raised his mighty head and trumpeted out a warning, and then we saw what his agitation was all about.  At the edge of the clearing was another bull, looked a lot younger, and he had his head down, while he scuffed the ground with his front hooves.  We held our breath as he charged straight at the big bull — you can imagine the excitement for a young boy with cowboy dreams — and honestly, when their heads met, the ground shook.  Wild buffaloes couldn’t have been more thrilling!  But the tussle  was over just as quick — the big bull snorted and seemed to scoff, as the younger challenger turned away.

‘The cows didn’t seem too bothered by all this macho display, just lying there calmly chewing their cud, you know, and after my dad had got a few more photos, we slipped back toward the big house.  Until the warden stopped us — I remember we all bumped into each other, so abrupt it was — and pointed into a little copse.  A solitary cow almost hidden there seemed to be in some distress.  “I think she’s about to give birth,” the warden whispered, “Let’s just wait here a minute.”

‘I remember he passed me the binoculars.  Well, the cow was lying down, with her neck stretched out, and I’d have thought she was dead, apart from the vigorous twitching across her belly.  And then she lifted her head, and seemed to heave, and out slipped this mucus-covered sack like a floppy bag of bones that suddenly gave a twitch and kicked its legs about.  The cow stretched her big head back around and began to lick it all over, as we watched.  We were just amazed!’

From off-camera, the voice trembles a bit:  ‘Not many people can have seen that — you must have been so very lucky!’

‘Yes,  it was the biggest day of my life, at that point, you know!  So the warden looks at me, standing there with my eyes as wide as saucers, my cowboy hat still perched jauntily on my head, and he says, ‘“Well now, seein’ as how that  little calf is a boy calf, seems like our young visitor here should have a chance to name it.  What about it, cowboy?” he says.  He was looking right at me with a broad smile, and with those buffalo dreams and the wild west running through my mind, I just blurted it out:  Wild Bill!

‘And then, well, then, becoming a vet was the only thing for me, but that was the start of it, for sure.  I’m sorry, but I can’t remember much about the castle itself, to be fair.’

Off-camera voice:  ‘Never mind about that William, thank you very much.’ 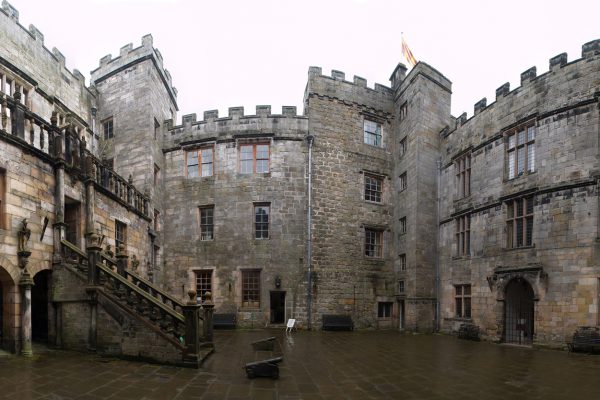