‘The Return to the Old Hall’, by Al Lacey 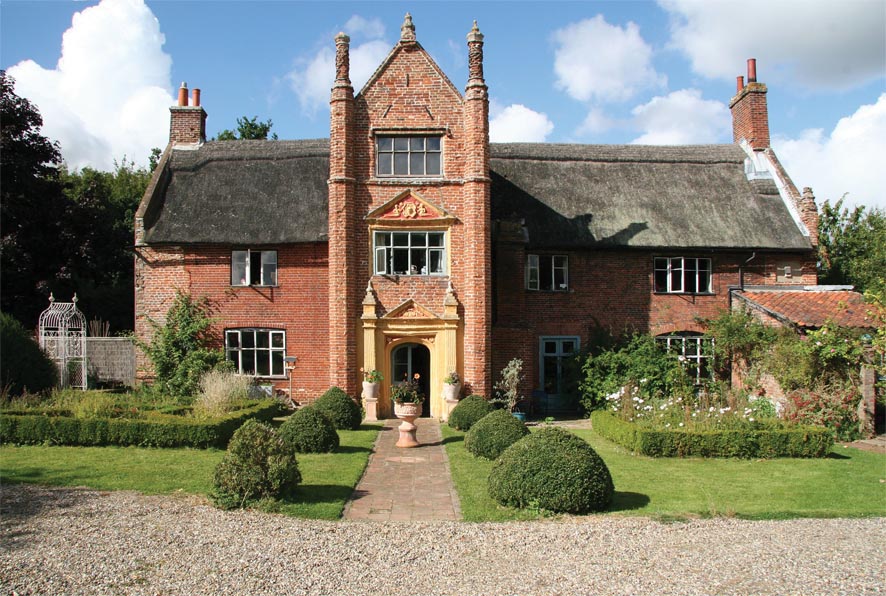 Long shadows stretched across the yard, blurring the edges of the stone work and hiding the tangle of plants growing up through the cracks in the flint.  Moonlight shimmered through the branches of the trees, briefly lighting up the mullioned windows of the building. The meadowland behind the house was over grown, and the moat was choked with weeds either side of old the bridge. Leaning against the wall, Clemmie momentarily enjoyed the residual warmth, left over from the early autumn sunshine. She had approached the long building across the fields with such stealth and, with such expectation, that this quiet and calm was hard to comprehend. Where were the dogs? The lights? The brothers?

Clemmie knew she had to make a move. The flickering moonlight had shown her the door leading into the side passageway. Keeping the wall at her back, she made her way around the cobbled yard until she could feel the dry peeling paint of the panelled door under her fingertips. Listening again, she heard nothing but the faint sigh of the wind through the trees. Clemmie grasped the worn brass knob and twisted it slowly, gently easing the door open a few inches. Nothing. She pushed again, noting the dark beyond the door,  sliding silently through the gap.

The darkness in front of her was briefly lit by the moon, revealing familiar territory. Clemmie crossed the kitchen to peer through the window, rubbing the small panes with her sleeve. All quiet. She turned to look around, her eyes adjusting to the dark. The door leading out was ahead of her and carefully avoiding the kitchen furniture and cold range, she moved into the large hallway. She could make out the curved stairs to her left and began to ascend.

She was almost at the top when she heard the unmistakable sound of a vehicle, moving fast and stopping abruptly, breaks shrieking, car doors opening, voices, men, shouting, dogs barking, orders yelling, a door crashing open. Fear clenched her chest, her throat. The brothers were back.

Moving quickly, Clemmie reached the landing. Feeling along the walls, the old wood bumpy under her fingertips, she found the nearest doorway and, slipping inside, closed the door with an imperceptible clunk. Downstairs could be heard noisy footsteps and voices, chairs being roughly scraped along the floor, fists thumping on wood, cupboards opening and shutting, glasses chinking. A disconcertingly cheerful sound.

She leant against the door, her forehead resting on the wooden panel, fright making her weak.

She spun around, gasping, eyes frantically searching the blackness for the source. The light flickered on, blinding and disorientating. Instinctively Clemmie put her hand up to her eyes, shielding them from the sudden brightness of a bedside lamp.

‘What a lovely surprise,’ the voice, smooth as silk.

She dropped her hand, blinking. Sprawled across the bed, loose limbed, bare footed, and utterly relaxed, was a man. Aged in his thirties, dark haired, bearded, he wore tortoise-shell framed glasses, a crumpled check shirt, faded jeans, exuding both confidence and menace in equal proportions.

‘Come in, take a seat,’ he continued, waving a languid hand at the chair.

As she reached back to grasp the door handle, body tensed for flight, he lifted a gun from the coverlet beside him, waving it in the direction of the chair as a signal that she should do as he had suggested.

Moving slowly away from the door, eyes never leaving his, she perched stiffly on the edge of the seat.

‘It’s been a long time, hasn’t it?’ he inquired conversationally, rising from the bed in a sinuous movement and going over to the door. Opening it, he listened, before closing it softly, and turning the key in the lock. Returning, he grabbed her head, pushing it back.  Hard grey eyes behind their lenses scrutinised her features carefully. The strength in his fingers provoked a stream of unwelcome memories. She flinched away from him, her hands pushing against his.

‘You haven’t changed much, have you?’ He stepped back, watching her closely.

‘Neither have you.’ she replied, finding her voice at last.

He smiled without humour.

‘Can’t you guess?’ she answered, her voice stronger. ‘Did you all really think I would just meekly go away and let you keep her?’

‘Why not? After all, she was never yours to keep.’

Her fists clenched in her lap.

‘She was mine! How could she not be when I carried her in my body all those months?’

He laughed mirthlessly, indifferent to her pain.

‘You were merely the receptacle, of no importance to us, and now you are an empty shell, redundant, of no further use.’ He eyed her dispassionately, ‘You should have stayed away,’ sighing wearily he added, ‘and now we’ll have to do something more permanent.’

‘No, No! Just let me see her, please!’ Her voice rose, painful sobs tearing at her as she stood in front of him, shaking.  She remembered his capacity for careless cruelty.

He reached over towards her, casually delivering a stinging slap across her face, before turning towards the door. Desperation gave Clemmie strength, adrenaline streaming through her body. Without thinking, she grasped the base of the light and with all her might smashed it down on his head, catching the back of his skull.

With an ‘oof’ of surprise, he sank to his knees. As the blood began to seep from the wound, she hit him again, watching him collapse onto his face, his glasses snapping. She crouched over him, the lamp raised in her hand, ready to strike.

The blood pooled beside his head, his inert body stretched out before her.

She put the lamp down, and picked up the gun.  She noted automatically that the safety catch was on. Leaning forward, she slipped a hand in his pocket, retrieving the key.

Locking the door behind her, Clemmie continued down the corridor, until she saw a pale strip of light at the base of a door. The gun steady in her hand, she silently turned the heavy handle.

The gentle glow of a nightlight illuminated the sleeping form of a child. Dark curls framed her rosy face, thumb slack against her mouth, sleep suit clad legs stretched out, starfish like, blanket kicked away. Clemmie stared down at her, the rush of love and longing overwhelming her.  Bending down she stroked the downy cheek. ‘My baby.’ she whispered.

Using the uproar of the brother’s voices to cover the sound of her steps down the stairs and along the corridor, Clemmie reached the heavy panelled front door. Shifting the weight of the baby onto her shoulder, she grasped the handle and eased it towards her, stepping soundlessly out onto the overgrown drive. The rush of cold air came as welcome relief after the damp musty smell of the decaying house. Holding the baby tightly she hurried away from the Hall, its rosy red walls turned to grey in the ghostly light. She stopped for a moment on the other side of the moat and looked back, taking in The Old Hall’s stately form, so much promise turned to rot.

And then she was gone.