‘The Green Shoes’, by Linda Hardey 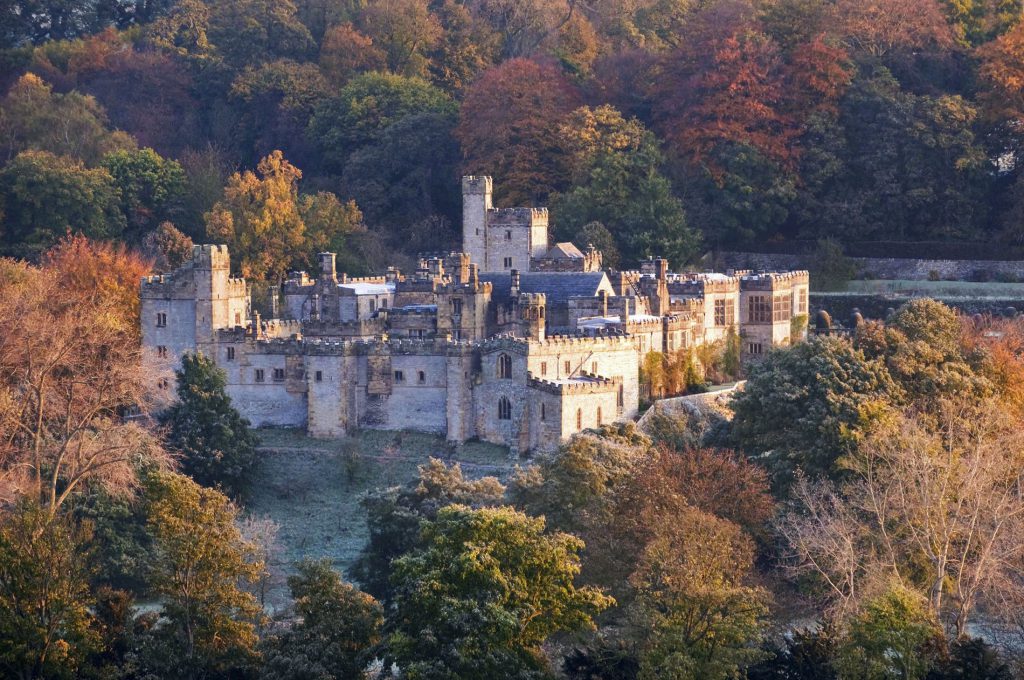 She had wanted so much to be a grandmother. Yet she felt guilty even about her sorrow – Helen’s loss being so much more personal than hers. The vicar at her church was kind. But the Christmas cribs and Nativity plays seemed cruel irony that year.

“Volunteer as a room guide at a historic house or something,” a friend advised. “You like history, don’t you?  Antiques, gardens and suchlike.  Take your mind off things.”

She’d always loved Haddon Hall, grey and romantic on its bluff by the tumbling river. They dress the house for Christmas.  They were short of room guides that year.

Goodness, but it got cold standing on those stone flags! She imagined Haddon’s medieval residents, fur collared, thick brocade skirts brushing the floor, and the heat and sweat in the kitchens as cooks laboured over Yuletide pies and marchpane fancies. Despite the logs blazing in the Great Hall, upstairs – in what had been once a bedchamber and in later times a billiard room – her breath misted the air.  She stood for hours, answering questions from curious visitors.  She loved showing the children the figures in the tapistry, treasured their shining-eyed wonder.

“See the horses?  And the hunting dogs?  And just there, look – a rabbit.”

One day when snow brushed the diamond paned windows and visitors were less numerous, she noticed the little girl in the picture.  Blonde, all in green.  Stiff and cartoon-like in the way of those Elizabethan figures. A funny little headdress, clutching a rattle, or was it a toy? And all day she could not help wondering, would she have been blonde?  They said it had been a girl – the baby she could never now buy toys for.

In her break, after she’d eaten her sandwich, she joined the visitors and examined the items in the tiny museum – such fascinating fragments of antiquity.  Musket balls from the Civil War, a comb carved from bone, fragments of Roman glass. Workmen renovating the house in the 30s had found all kinds of small objects under floorboards and behind wainscotting.  The one that snared her attention was the little shoe. Battered, faded, very old.  She fancied, though she could not be sure, that it had been green once. “Apotropaic deposit,” a retired professor explained to her.  “Shoes are often found placed in voids – chimneys, sealed up cupboards et cetera. Believed to bring good luck.”

But, no.  Perhaps that was not always the reason.  She imagined a lively mischievous child, pushing one of its new shoes through hole in the floorboards, and the nurse laughing as she scolded.  “And now we’ll never get it out, you little monkey! And what will you wear for the Twelfth Night Feast, eh?”

At five fifteen, as she switched off her walkie talkie and started collecting up her room notes, she heard pattering footsteps on the floor of the Long Gallery.  Dogs were not allowed in the house.  She began walking up to see.  No, not a dog.  It was a skipping step.  Almost a dance step.  A lost visitor unable seeking their way out perhaps?

Barbara, Guide Supervisor, was snapping off lights and checking fire alarms. “What is it?

“Someone in the Gallery I think.  Hold on, I’ll check.” She clicked on her torch, a necessity on winter nights, when the last visitors had gone and the path to the car park was pitch black.

Her friends talked endlessly about Christmas, boasting of the presents they were wrapping for their grandchildren.

“What would Helen have called the baby, do you think?” she asked her son.

“Mum, it’s been eight months now. You shouldn’t dwell on things,” he murmured, and changed the subject.

A party of Dutch pensioners on a coach tour could not get enough of the Hall. “Mooi! Erg mooi!” they sighed, enraptured. “So many figures and animals figured in the weave!” one exclaimed over the tapistry. “Which is your favourite?”

“The little girl in green,” she smiled.

“Down there, in the corner near the…” she stopped. There was no girl.

She wondered, driving home in the dark, if the stress of the past months had affected her mind.

She wondered more when she began hearing the giggles. Sometimes in the parlour, sometimes outside on the frosty Terrace.  One morning, before opening time, a ball bounced down the stairs as she walked up them to her station by the tapistry. It wasn’t rubber or plastic, but hard stitched leather – old and stiff.

And someone began hiding her room notes. She found them in silly places, like tucked behind the huge flower arrangement in the screens passage, or in the old bread down in the Tudor kitchens.

She and another volunteer were asked to renew the ivy garlands in the Chapel, which had wilted. Though the grey stone building breathed antiquity, the white marble effigy of Lord Haddon made her uneasy.  Fragile beautiful boy, dead at the age of nine. The original – sculpted by his grieving mother’s own hand, stood at the Duke of Rutland’s residence of Belvoir Castle.  This faithful copy was so lifelike, it might have been a real boy, asleep in his bed.

As they worked, she noticed out of the corner of her eye, two of the scented pomanders that decorated the font roll quietly across the floor, like bowls in a game of petanque.

“Oops! Must have knocked against them without realising. And that floor must slope more than I thought,” laughed her helper.

Christmas eve was their last day of opening. The candlelight tours were done, the restaurant had served its last festive meal.  After the break, the household team would take down and pack away the icicle baubles and the twinkling lights. After the hordes had departed, the guides had a little party – just sherry and cake – in the staff room, and chatted about celebrations and dinners to come. The lights sparkled on the frosted flagstones of the courtyard.  Beyond, velvet blackness and the gurgle of the river.

“Bother! I think I left my handbag in the Great Hall.”

“Well be quick! Some of us have turkeys to thaw!” snapped Barbara, “I’m about to set the alarms.”

She snatched up her torch and slipped into the great timbered chamber, still smelling of pine logs and rosemary, opened the bag she had not forgotten at all, and carefully placed under the great tree by the hearth, a small wrapped present.  Inside the box was a pair of tiny green velvet shoes.

“Happy Christmas” she whispered, into silence.

The telephone jangle sounded loud after her lonely drive home. “Mum, why are you always switching your mobile off!” her son nagged when she arrived home.  “We can never get hold of you when we want to!”  He sounded agitated.  She could not tell if he was angry or very excited.

“Been trying to reach you all afternoon! We’ve some news. Here, I’ll hand over and let Helen tell you herself.”

When she replaced the handset, tears of hope and happiness shone in her eyes. Shrugging off her coat something tumbled from the pocket. A green ribbon.