‘Many Happy Returns’, by Robert Hailey

“I just need to retrace my steps.”

That’s what Jimmy was thinking as he stood in the Great Hall of Dorney Court.

The day out was part of Jimmy’s birthday treat. He especially wanted to visit Dorney Court because of the ghost of the bald lady, said to be visible only to men. Well at ten years old he was almost a man. Besides which he wouldn’t mind seeing the naked portrait of the scandalous wife of Roger Palmer! Of course the other portraits were fun too; James Palmer with his goatish beard, Sir Philip and his funny Cocker Spaniel hair, and even the more modern photographs that included horses and dogs. Jimmy loved animals and intended to have a picnic overlooking the Dorney Wetlands. But first he must find the ghost.

As he looked around the room Jimmy vaguely wondered what had happened to his parents and the tour guide. They had been right behind him as he entered the Great Hall, but now they were nowhere to be seen. They couldn’t have gone far in such a short time as they were very old, almost forty for goodness sake! “I bet mum has gone to inspect the kitchen” he thought, “and complain to dad that hers is just as old fashioned!” He knew women were always complaining about their kitchens; but they weren’t there, or in any of the other rooms; in fact Jimmy seemed to be alone in the house! Jimmy ran back to the Great Hall wondering if his parents had returned to look for him. As he entered the room he knew something had changed, there were fewer portraits on the walls, the newer ones and the photos had gone, and the furniture looked different. It couldn’t be the same room. Maybe this was a second Great Hall? As they had approached the old Tudor building he could see it was big, but how could it contain so many enormous rooms? How could he be lost? And yet he was! Jimmy snatched his smartphone from his pocket and hit his mother’s number. Nothing happened. The battery was OK but there was no signal; no phone, no text, nothing. He was alone in a huge old house with no way of calling his parents, or anyone else…

As he stood there wondering what he should do he slowly realized why this room now felt so different. There was a cosy feel to it, sort of warm and lived in. Yes of course, he must have wandered into an occupied part of the house! In that case all he had to do was wait for someone to find him! Just think, it might be a member of the Palmer family, he might be invited to tea, waited on by servants! What a story to tell his friends! So Jimmy had a new quest; try to be found by a member of the family.

Wandering from room to room looking for someone to find him he noticed each room was more antiquated than the last. In this room there were glowing embers in the fireplace and a couple of still smoking clay pipes on the table. This must be the parlour. Obviously people had been here recently. Jimmy wondered where they had gone. He decided his best option was to return to the Great Hall because he stood more chance of being found, even if it wasn’t by a member of the Palmer family. Back in the Great Hall he became even more confused. Now there were no portraits at all and just a few wooden chairs pushed up against the walls. This must be a third Great Hall. But how? It was impossible. “I just need to retrace my steps” he told himself, “and I will find my way back to my parents.”

Well this was certainly an adventure! The funny thing was that despite being lost in a big old house with what seemed to be an infinite number of rooms Jimmy wasn’t frightened. Although he appeared to be trapped inside the house, with every room and passage leading to another room and then back to the Great Hall, he had always felt wrapped in the protective warmth of a loving home. Suddenly he heard the sound of a woman’s voice calling from the garden. He couldn’t make out what she was saying, or even if it was his mother, but the voice was so gentle and reassuring he knew he had to follow it. And this time it was easy. Along past the main staircase and out of the front porch. The voice was louder now, although just as soft and gentle; was it his mother’s voice?

Jimmy ran towards what he thought was his mother’s voice. Dazzled by the bright sunlight, his eyes filled with tears of joy and relief, he had only the voice to guide him towards the carpark. It was so obvious, his parents were waiting for him by the car! In just a few seconds he would calmly stroll up to them and they would all enjoy a picnic together in the grounds. As his eyes adjusted to the daylight he noticed something was wrong, in fact everything was wrong. Someone had removed the signs directing visitors around the grounds. If it wasn’t for the reassuring voice calling him towards the carpark he would be lost; even the trees and hedges looked different. On the way in the hedges had been tall and wide, now they were thin and spindly as though they had just been planted. What was going on???? Jimmy was a sensible lad and knew there must be a logical explanation. It was his birthday and this day out was a birthday treat. He had heard about unusual birthday treats, like being locked in a room and having to follow clues to escape. Yes, that must be it. His parents had arranged all of this; changing things in the rooms, movable partitions to always send him back to the Great Hall, his mother calling him to a different carpark. Now he knew the truth he would play along and just enjoy the whole thing! This was the best day out ever!

Of course it was no surprise when the carpark was empty except for an old stagecoach with a pair of rather fine horses whinnying at his approach. Jimmy loved horses and ran up to pet them. He hadn’t noticed the coachman or the lady sitting in the coach but a gentle flick of the coachman’s whip close to Jimmy’s ear attracted his attention. This was all very well done, all very realistic, just like being back in Tudor times! What a tale he would have to tell his friends, and wouldn’t his parents be surprised when he told them he had worked it all out so easily.

The ‘ghost’ of the bald lady opened the coach door and beckoned to him. As Jimmy leaned into the coach it seemed to grow larger, sucking him further in until he was again standing in the Great Hall. Soaked with cold sweat the thought burned through Jimmy’s mind; “I just need to retrace my steps……” 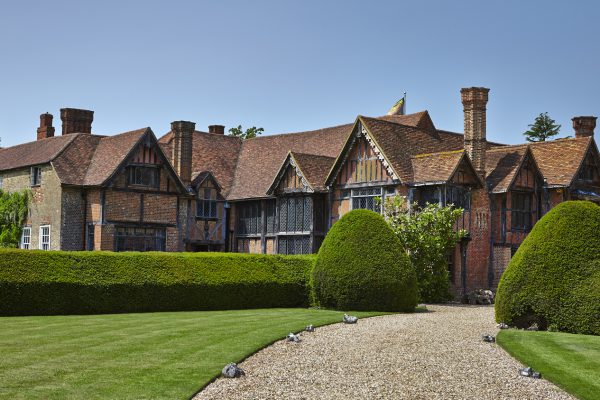