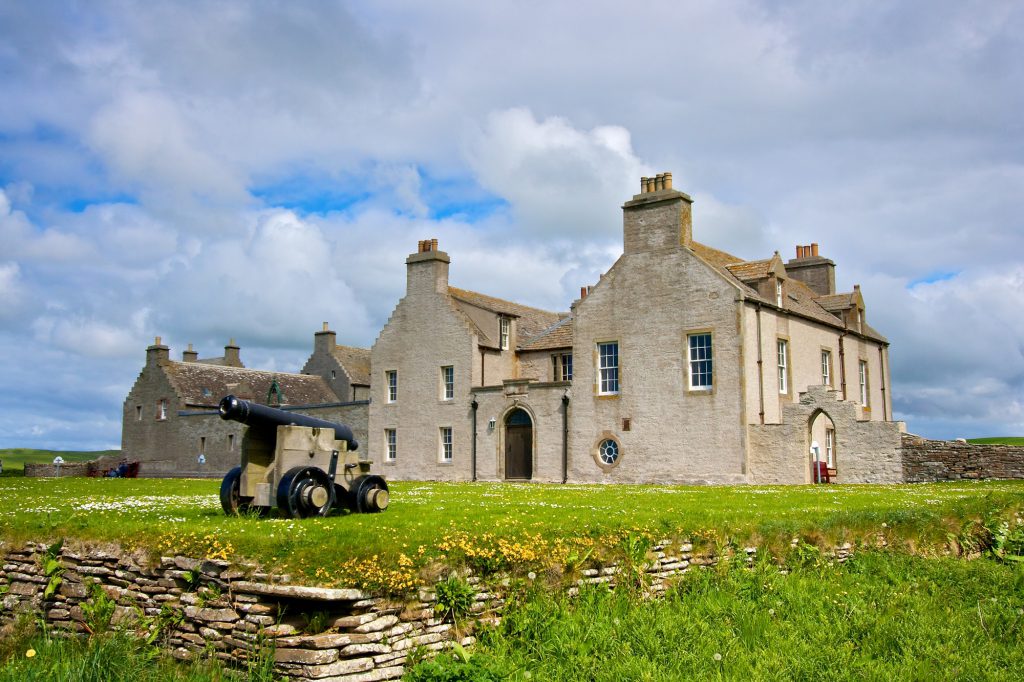 Ubby, “Nanny” of Sausmarez, and the Lady of Miltown, are actual ghosts of their manors.

Ubby pushed off his small rowboat from the shores of the island in the center of the loch.  He had built the island himself, stone by stone carried from the craggy Mainland shore and deposited until a small island had emerged from the dark loch waters.  Ubby had been a young man when he started building his island, his blond, flowing hair and tightly curled beard revealing his Norsemen heritage.  Now, as he rowed his craft toward the shoreline, he appeared much older, gray-haired and with a beard sprinkled with white flecks that resembled ice crystals from North Sea spray.

Yes, he appeared older, but he didn’t appear often.  Ubby was the ghost of Skaill House, a historic manor in the Orkneys.

Ubby reached the loch shoreline and dragged his flat-bottomed boat onto the muddy rocks. He levitated over a small stone wall and floated toward the old stone manor. Contemplating his upcoming mission, he lost his nerve, opting to stall a few moments in order to visit Skara Brae, the finest preserved Neolithic village in the world, a mere 200 meters from the manor house. “The Scottish Pompeii” was older than Stonehenge, older than the Great Pyramid of Giza, and had been designated a World Heritage Site. Occupied for nearly 700 years before its abandonment ca. 2500 BCE, Skara Brae still displayed proudly its stone foundations, and even some Neolithic furniture and other artifacts.

Visiting Skara Brae almost always filled Ubby with pride, as he imagined his ancestors braving the frigid seas in their longboats to settle these Orkneys.  He could picture blond warriors climbing up from Skaill Bay to explore the hilly island, deeming it suitable for farming, and planning to bring their wives, sons, and daughters to these lonely shores.

Unusually, today Skara Brae was not a source of pride for Ubby, but of shame.  He was ashamed of his reluctance and nervousness.  Where was his Norse courage?  Why could his ancestors tackle such terrors, while he stood quivering at the mere thought of trying to get a date?

“Fie, Ubby!  Get yerself up to the manor,” he reproached himself. He reflected that his last attempted relationship had been a failure, about a century earlier when he tried to woo the Ghost Lady of Milntown, the haunted historic mansion on the Isle of Man.  The Lady was an apparition of absolute loveliness, notwithstanding the Manx accent that grated slightly upon his ears.  She was gentle, loving, and kind, and Ubby fantasized about taking her home to his little island in the loch.  That proved to be the stumbling block, as she found the rough-hewn harling-covered walls of Skaill House less pleasing than the Gothic front and Georgian interior of Milntown.  She obviously had been fond of Ubby, as she invited him to help her haunt Milntown on a trial basis, a few decades at most, but she already had a co-tenant who was as unpleasant and nasty as any ghost you might imagine.  Even worse, the blighter delighted in making things unpleasant for the Lady’s would-be lovers.  For Ubby, that was a non-starter.  His current mission to Skaill House was a far better plan. Onward, Ubby!

Courage and resolve replenished, Ubby floated from Skara Brae toward the walls of Skaill.  His Norse pride swelled as he recalled that “skaill” was Norse for “hall.”  Beowulf’s King Hrothgar would have been proud to forsake the confines of the great mead hall Heorot to assemble his thanes in the comfort of Skaill House.  Ubby conceded that Skaill lacked the refinement of Milntown, but it was nearly a century older.  In fact, 2020 was its quadricentennial, 400 years since the Bishop of Orkney had set a small manor house upon this site, the oldest walls of a residence that had gradually grown through the years.

Ubby decided to forgo the front entrance in favor of entering through a crow-stepped gable window just below the roofline.  The dogs inside the manor would soon sense his presence and grow restless.  Ubby had no desire to inconvenience or annoy the family of the Twelfth Laird of the Manor, currently owners of the property, and he hoped the dogs would stay relatively calm.  The upstairs window proved a good choice for his entry – the dogs stayed quiet and Ubby could sense a soft glow in the next room.  Entering the room, Ubby spied upon a small oaken table, a late-model laptop displaying its screensaver.  That was his destination.

Ordinarily, Ubby would have stopped to admire the collections of Bronze and Iron Age artifacts on display behind festooned red ropes.  Most of these had been discovered by the Seventh Laird, the man who excavated Skara Brae.  On some other night, for a lark, Ubby might have rattled the dinner service that once accompanied Captain Cook upon the Endeavour.  He might have ruffled the covers upon the Bishop’s bed.  Not tonight. Clutching a small scrap of paper, Ubby typed out the internet address of the best-known Miss Lonelyhearts in the world of the afterlife, the Nanny of Sausmarez Manor.

Sausmarez Manor could not have been more different from Skaill.  Whereas Skaill was the northernmost British historic house, a shelter against the windy Orkney squalls, Sausmarez was the southernmost, nestled in a subtropical climate on the Channel Isle of Guernsey. Saumarez had been under continuous ownership by the Seigneur’s family for more than 600 years, and its oldest sections dated to 13th Century Norman, but the house had undergone numerous renovations through the years, with traces of Tudor, Queen Anne, Regency, and Victorian styles.  Palm trees, camellias, ginger lilies, and towering bamboo decorated its gardens.

The manor itself housed ten ghosts, and Nanny was its most famous.  Indeed, her portrait still graced its walls at the base of a stairway.  During her lifetime, she had been the nanny to a previous Seigneur’s twenty-eight children.  Twenty-eight!  No wonder she still haunts the place, scaring off any living suitors she deems unsuitable for the residents.   Her experience as gatekeeper to the lovelorn also gave her a natural sideline — arranging matches for lonely ghosts.

Ubby gulped as Nanny launched the videoconference app.  He hadn’t bothered to comb his wild hair or dress in his finest.  He was afraid he’d make a bad impression, but Nanny did not appear troubled at all.  Although Ubby did not know it, Nanny was already aware of Ubby’s previous dalliance with the Lady of Milntown, and she knew Ubby to be a decent, honorable ghost.  She said, in a reassuring voice, “Hello, Ubby.  I’ve actually been expecting you. How can I help?”

Ubby breathed a sigh of relief.  He’d rather die a thousand deaths than appear so needy, but Nanny seemed to understand the needs of a long-single ghost haunting a remote, wind-swept island.

“Nanny, I’m lonely.  Can you help me find a kindred spirit?” 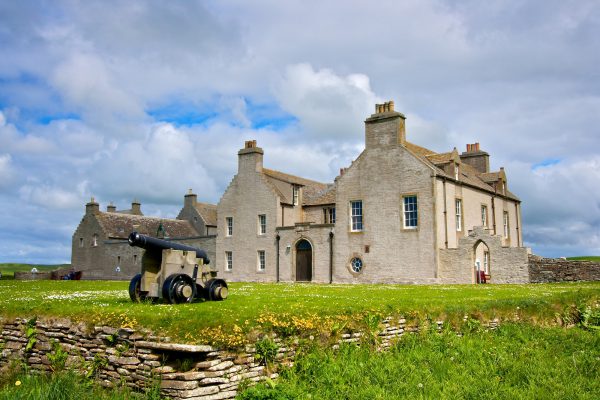