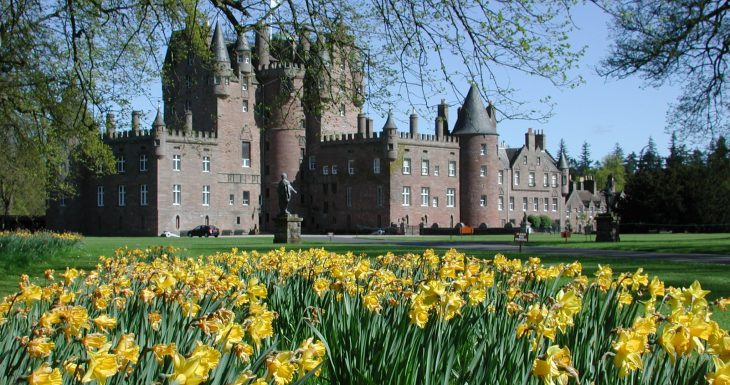 The vicinity of Glamis Castle has prehistoric traces; for example, a noted intricately carved Pictish stone known as the Eassie Stone was found in a creek-bed at the nearby village of Eassie.

In 1034 Malcolm II was murdered at Glamis, where there was a Royal Hunting Lodge. In William Shakespeare’s play Macbeth (1603–06), the eponymous character resides at Glamis Castle, although the historical King Macbeth (d. 1057) had no connection to the castle.

By 1372 a castle had been built at Glamis, since in that year it was granted by Robert II to Sir John Lyon, Thane of Glamis, husband of the king’s daughter. Glamis has remained in the Lyon (later Bowes-Lyon) family since this time. The castle was rebuilt as an L-plan tower house in the early 15th century.

The title Lord Glamis was created in 1445 for Sir Patrick Lyon (1402–1459), grandson of Sir John. John Lyon, 6th Lord Glamis, married Janet Douglas, daughter of the Master of Angus, at a time when James V was feuding with the Douglases. In December 1528, Janet was accused of treason for bringing supporters of the Earl of Angus to Edinburgh. She was then charged with poisoning her husband, Lord Glamis, who had died on 17 September 1528. Eventually, she was accused of witchcraft, and was burned at the stake at Edinburgh on 17 July 1537. James V subsequently seized Glamis, living there for some time.

In 1543, Glamis was returned to John Lyon, 7th Lord Glamis. In 1606, Patrick Lyon, 9th Lord Glamis, was created Earl of Kinghorne. He began major works on the castle, commemorated by the inscription “Built by Patrick, Lord Glamis, and D[ame] Anna Murray” on the central tower. The English architect Inigo Jones has traditionally been linked to the redesign of the castle, though Historic Scotland consider the King’s Master Mason William Schaw a more likely candidate, due to the traditional Scottish style of the architecture.

During the Commonwealth of England, Scotland, and Ireland, soldiers were garrisoned at Glamis. In 1670, Patrick Lyon, 3rd Earl of Strathmore and Kinghorne, returned to the castle and found it uninhabitable. Restorations took place until 1689, including the creation of a major Baroque garden. John Lyon, 9th Earl of Strathmore and Kinghorne, succeeded in 1753, and in 1767 he married Mary Eleanor Bowes, heiress to a coal-mining fortune. He set about improving the grounds of the castle in the picturesque style in the 1770s. The south-west wing was rebuilt after a fire in the early 19th century. In the 1920s, a huge fireplace from Gibside, the Bowes-Lyon estate near Gateshead, was removed and placed in Glamis’ Billiard Room. The fireplace displays the coat of arms of the Blakiston family; Gibside heiress Elizabeth Blakiston had married Sir William Bowes. Several interiors, including the Dining Room, also date from the 18th and 19th centuries.

In 1900, Lady Elizabeth Bowes-Lyon was born, the youngest daughter of Claude Bowes-Lyon, 14th Earl of Strathmore and Kinghorne and his wife, Cecilia (née Cavendish-Bentinck). She spent much of her childhood at Glamis, which was used during the First World War as a military hospital. She was particularly instrumental in organising the rescue of the castle’s contents during a serious fire on 16 September 1916. On 26 April 1923 she married Prince Albert, Duke of York, second son of George V, at Westminster Abbey. Their second daughter, Princess Margaret, was born at Glamis Castle in 1930.

Since 1987, an illustration of the castle has featured on the reverse side of ten pound notes issued by the Royal Bank of Scotland. Glamis is currently the home of Simon Bowes-Lyon, 19th Earl of Strathmore and Kinghorne, who succeeded to the earldom in 2016.