The most northerly of Scotland's great houses and the largest in the Northern Highlands with 189 rooms. 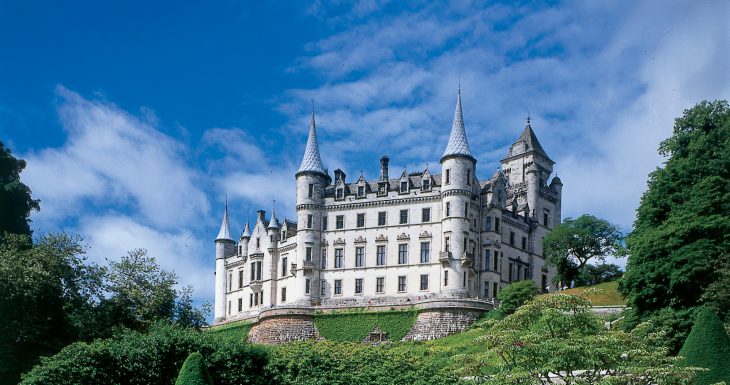 Dunrobin Castle has been called home to the Earls and Dukes of Sutherland since the 13th century and was first mentioned as a stronghold of the family in 1401.

The Earldom of Sutherland is one of the seven ancient earldoms of Scotland and the Sutherlands were one of the most powerful families in Britain with many important matrimonial and territorial alliances.

The Earldom of Sutherland was created in 1235 and a castle appears to have stood on this site since then, possibly on the site of an early medieval fort. The name Dun Robin means Robin’s Hill or Fort in Gaelic and may have come from Robert, the 6th Earl of Sutherland who died in 1427.

The early castle was actually a fortified, square keep, with walls six feet thick and a vaulted ceiling, looking out from a cliff-top position. The keep stood isolated for some 200 years until a staircase and a high house were added.

It was encased by a series of additions from the 16th century onwards. In 1785 a large extension was constructed. Remarkably this early keep still survives, much altered, within the complex of these later extensions, making Dunrobin one of the oldest inhabited houses in Scotland.

Sir Charles Barry was retained in 1845 to completely re-model the castle, to change it from a fort to a house in the Scottish Baronial style that had become popular among the aristocracy, who were inspired by Queen Victoria’s new residence at Balmoral.

Barry had been the architect for the Houses of Parliament in London and was much in demand. There is very much a French influence with conical spires to the whole project, including the gardens, based on Versailles, which he laid out in the 1850s.

Much of Barry’s interior was destroyed by a fire in 1915 and the interior today is mainly the work of Scottish architect, Sir Robert Lorimer, who altered the top of the main tower and clock tower at the north side of the building to the Scottish Renaissance style.