Stone-built house set within the walls of Ludlow Castle. 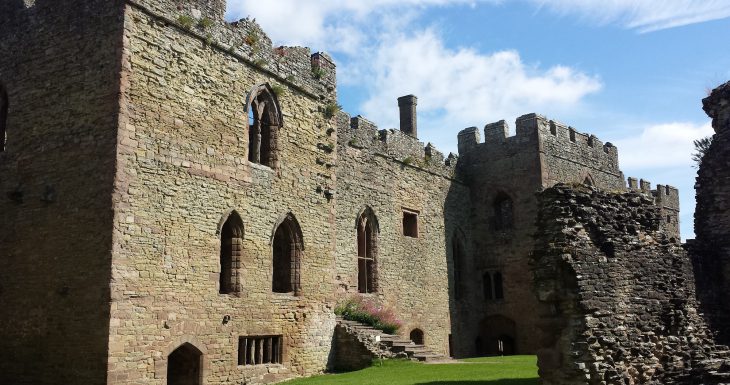 Castle House is a fine 19th Century mansion, which took on its final form in 1904.

The interior has been much altered, but the imposing garden front retains its original appearance. Ludlow has a number of fine houses with spacious gardens, which reflect the social importance of the town, especially in the 18th Century. As Ludlow lost its social glitter in the 19th Century, however, fewer such houses were created.

Castle House was in fact the last to be built, a grand style of living lingering here until the Second World War. The southern part of the Castle House, nearest the castle entrance, occupies the site of an indoor tennis court, built in the late Tudor period. This was aligned between the curtain wall of the outer bailey and part of what is now the garden front of Castle House.

By the mid 18th Century The Castle Inn had been built at the north end of the tennis court. The main room of the Inn is now the tea Room. The Inn closed in 1810 just before the freehold of the Castle was bought by the Earl of Powis from the Crown in 1811 for £1,560. By 1828 or earlier a substantial house had been built on behalf of the Earl, using the Tennis court and part of the Inn as a rectilinear framework, adding new building to the north, almost to the Medieval Beacon Tower.

The house conformed with a traditional layout, with the kitchen and other service rooms nearest the Castle entrance, on the site of the tennis court, and the dining and drawing rooms at the other end. There was then a series of tenants both local and from outside Ludlow in residence and in 1904 an extension to the house was commissioned building a ball room/billiards room and study/library at its northern end. He stayed in Ludlow for only 2 years. From 1939 some of Castle House was used as a military convalescent home, and after, the whole building was requisitioned, to be used as a home for evacuees and as a nursery for the children of mothers engaged in war work.

By 1948 the house had been converted into flats such as would attract young professional families needed to bolster post-war Ludlow. In 1957 Castle House and its garden, divided among the eight tenant families, were sold by Powis Estates to Ludlow Borough Council from whom it later passed to South Shropshire District Council. The tenant families of these years made a conspicuous contribution to Ludlow life and prosperity during these years.

In 2002, after years of negotiation, the property was again acquired by The Powis Estate, thus re-uniting the property. The restored and refurbished building has a number of apartments, offices and visitor facilities and beautifully restored ballroom/billiard room, with its decorated friezes now available for hire as a function room and wedding venue.

Open for weddings and accommodation only.

See Exclusive Use for accommodation prices.

This house is not part of the Free for Members scheme, but is one of many houses on our website that we support to promote their tours, weddings, filming and other commercial offerings. To see all the places you can visit as a Historic Houses member, please visit our ‘Free for Members’ listings page here. Or to find out more about how the membership scheme works and how it supports our work to protect independent heritage, visit our page here.