From a certain angle in the gardens, Penshurst Place looks less like a house and more like a small town. A gorgeously irregular roofscape suggests – accurately – halls and passages opening onto courtyards linked by covered gateways, overlooked by windows large and small from suites of interconnecting rooms.

Yet the house is not in fact – at least by the standards of many of our member houses – so very large after all. As my host, Lady De L’Isle, points out, in most places the zigzagging wings are just one room wide, while the courtyards and indented facades that give it an engaging air of palimpsest deceive as to the extent of the apartments within.

Still, the largely Tudor house, built around a mighty fourteenth-century hall that that is almost unchanged after seven centuries, is large enough that as a boy growing up here Philip Sidney, current heir to the Viscountcy of L’Isle and Dudley – my guide for today – could be kept out of mischief by being tasked with counting the rooms. ‘Every time my sister, Sofia, and I attempted it, we would always come back with different figures,’ he says. 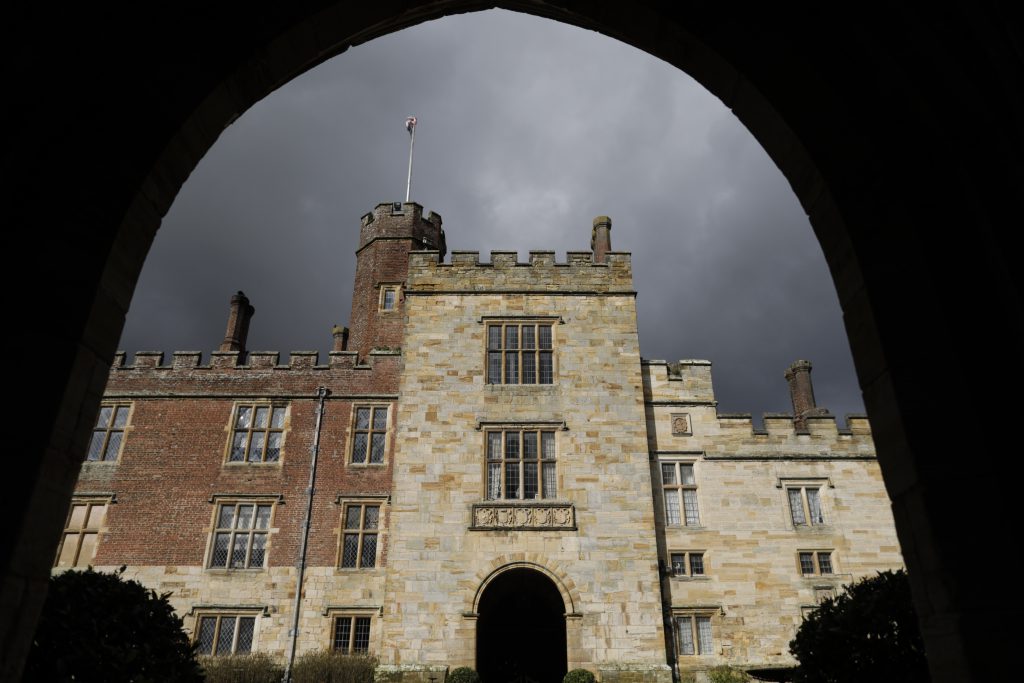 Philip is a commonly recurring name in the history of the family, but as a writer and poet himself my guide has more than his name in common with his Elizabethan ancestor who wrote over a hundred love sonnets and The Defence of Poesy. A 2009 sonnet by today’s Philip accompanies a modern garden sculpture of an archer, by Robert Rattray, a Sidney cousin, in memory of Philip’s grandfather William, the 1st Viscount De L’Isle. The text references his service at Anzio in 1944, for which he was awarded the Victoria Cross, and his time as Governor General of Australia, but the combined effect is to showcase the talents of a family that has been gifted with creativity for centuries.

For a short time one of Henry VIII’s residences – a hunting lodge conveniently close to Anne Boleyn’s home at Hever Castle, a few miles down the road – the house has been the seat of the Sidneys for almost five hundred years. That almost every part survives just as it was originally built is the result, Philip tells me with a typically self-deprecating chuckle, of, ‘no Sidney ever being loaded enough to rebuild the place in the latest fashions.’ Instead, the odd wing was added and now and then in good times: in 1552, when the house was granted to the family by Edward VI, and a generation later when Robert Sidney was created Earl of Leicester. There isn’t a classical element in sight; in Philip’s words, ‘the family rather took the eighteenth century off.’ 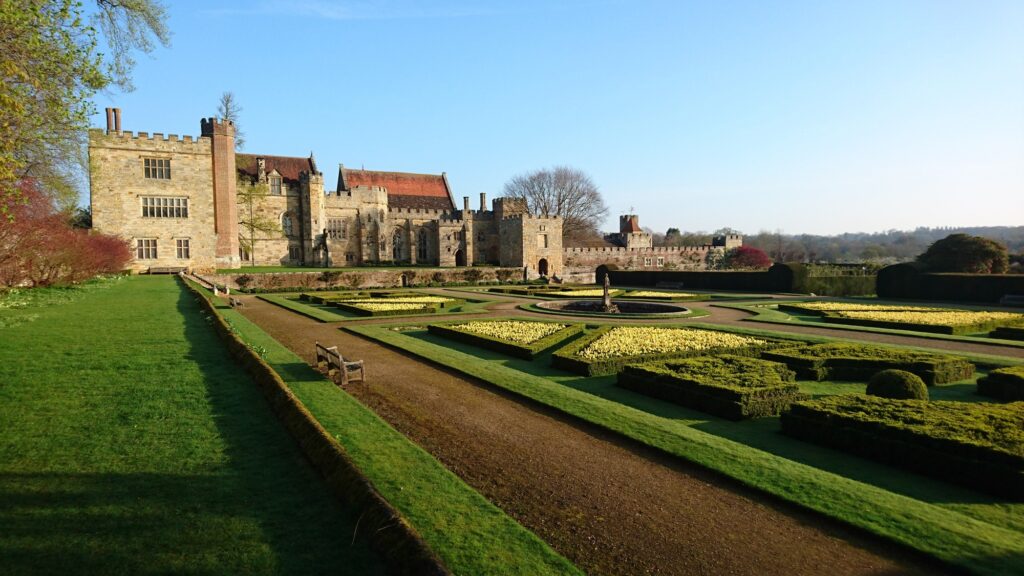 One duty in particular was neglected by Jocelyn Sidney, the 7th Earl of Leicester, who died in 1743. ‘He was good at growing cider-apple orchards but bad at fathering legitimate heirs,’ says Philip. As a result, the title became extinct. His illegitimate daughter married another neighbour, Henry Streatfeild of Chiddingstone Castle, and Jocelyn intended to leave his estate to the couple, but the will was contested and Penshurst eventually passed to cousins. By the end of the Georgian period the house was well on the way to becoming a ruin; ‘before ruins were in fashion,’ says Philip.

Sir John Shelley-Sidney, uncle of another famous poet, Percy Bysshe Shelley, inherited in 1818. He finally undertook an extensive, though sympathetic, restoration in the 1830s, at a time of revived enthusiasm for England’s medieval and renaissance history and architecture. It was he, and his son, another Philip – for whom the De L’Isle and Dudley title was recreated as a barony – who introduced the division between the state rooms and the private apartments that is still fundamental to the shape of the house today. 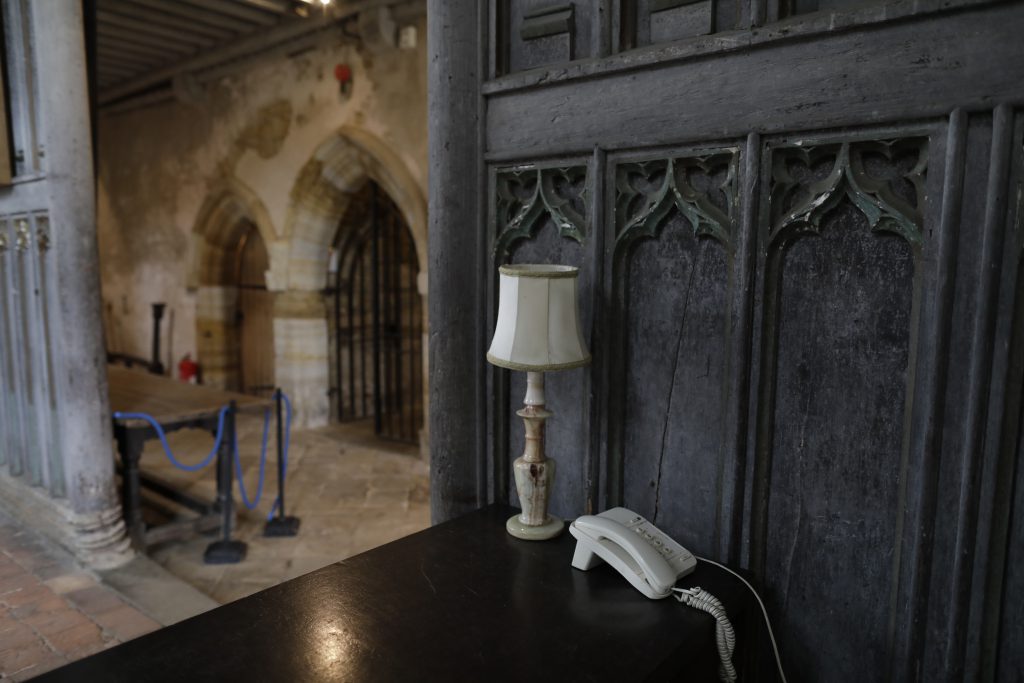 The family do still use the public rooms from time to time – Philip recalls a childhood birthday party with a Thomas the Tank Engine cake in the Sunderland Room, and a twenty-first bash in the State Dining Room – but there are practical constraints. It’s not just that they are, frankly, cold (which is as much a deliberate conservation decision as it is the result of draughts from the enormous doors and windows). ‘It takes about a day to clear away the formal dinner service that’s laid there most of the time, and then put it back afterwards,’ says Philip. Nevertheless, it’s important to the family that the whole building remains a living family home. As the present Lord De L’Isle is wont to say, ‘We’re not Euro-Sidney.’

This conservatism – ‘evolution, not revolution,’ as Philip calls it – runs through every aspect of the house and gardens. ‘As a family we have a habit of not throwing anything away,’ he says, ‘since space isn’t really at a premium,’ and is delighted to be able to tell me how a bar of chocolate from the Boer War that turned up recently has, ‘come in useful,’ for the new Victorian kitchen exhibition. There is a conscious sense that today’s purchases are tomorrow’s antique contents, and that the continuity of a family collection is something to be cherished. There is some curation, though: ‘My mother’s way of telling me to get rid of an especially moth-eaten jumper is to gently hint that it should be, “de-accessioned”,’ Philip laughs. 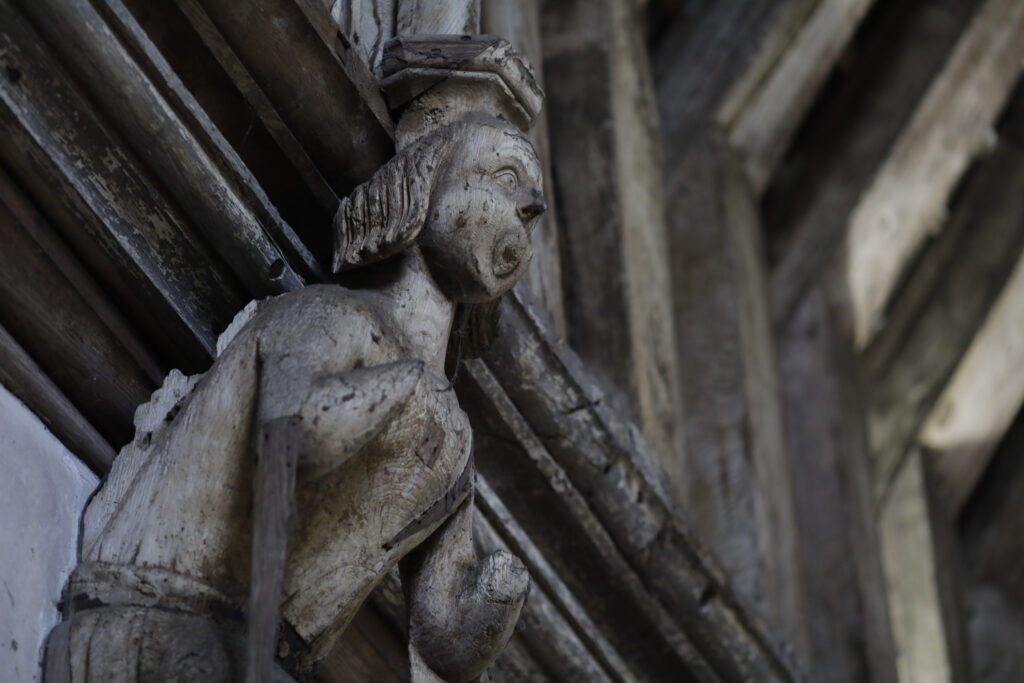 The grand furnishings in the formal rooms include innumerable family portraits and a selection of arms and armour. The Tudor long gallery, lined with the faces of not a few Philip Sidneys, has a surprisingly familiar air, explained when Philip identifies it as a set for The Hollow Crown, Wolf Hall, and The Other Boleyn Girl, amongst other things. The enormous Baron’s Hall is the centre of the house both literally and figuratively. Overlooked by a traditional ‘squint’ (a small window from which to spy on guests at a feast) from what is now the State Dining Room, it also shares a high opening with the nursery, through which, Lady De L’Isle tells me, the acoustics are such that every conversation below can be heard clearly and distinctly.

Down a flight of stone stairs from the hall is the crypt, in which we find a couple of the staff team giving some oak furniture its annual MOT with a mouth-wateringly scented polish based on bees’ wax. Around forty-five people work in the house now – far more than would have been in domestic service at the height of the Edwardian aristocratic age – and their employers are clearly doing something right. ‘Seven of the current team have been in post for more than 25 years each,’ says Philip. ‘Our head of accounts and head of property both worked their way up from initial jobs on the estate as school-leavers aged 19. 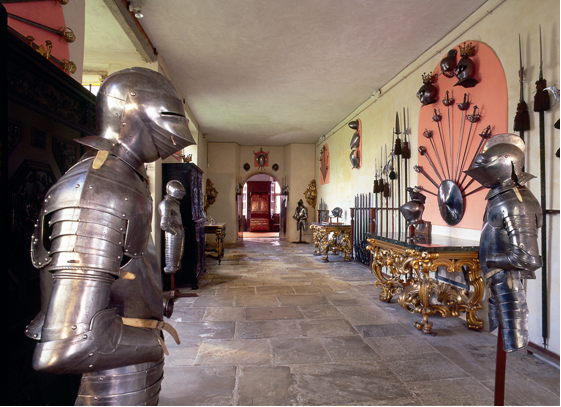 When a ‘centenary walk’ (marking not a century in the usual sense, but Lord De L’Isle’s seventieth birthday and his son Philip’s thirtieth in the same year), the trees were planted by both family and staff. That sense of a household of many generations and their faithful retainers, rather than simply employers and employees, is enhanced by the fact that several staff live on site – which necessitates some extra-large pockets to accommodate some extraordinary ‘back door keys’.

The size and composition of today’s team is driven by the bold decision, taken very soon after the Second World War, to become a tourist attraction. The 4th Baron De L’Isle and Dudley, the house’s occupant from 1922 to 1945, was a bachelor living in two rooms and the building was once again in poor repair – such a state, in fact, that even the military didn’t want it, making it unusual in this part of the country as a large house that was not requisitioned during the war. On his death (his younger brother briefly succeeded to the title but died later in the same year) his nephew, the war hero William Sidney, was faced with a bleak prospect. Doodlebugs had shattered almost every window in the house, the gardeners had been called up leaving the grounds to grow into a wilderness, and the surrounding estate, though still a respectable two-and-a-half thousand acres, was far too small to fund the upkeep of somewhere the size of Penshurst. 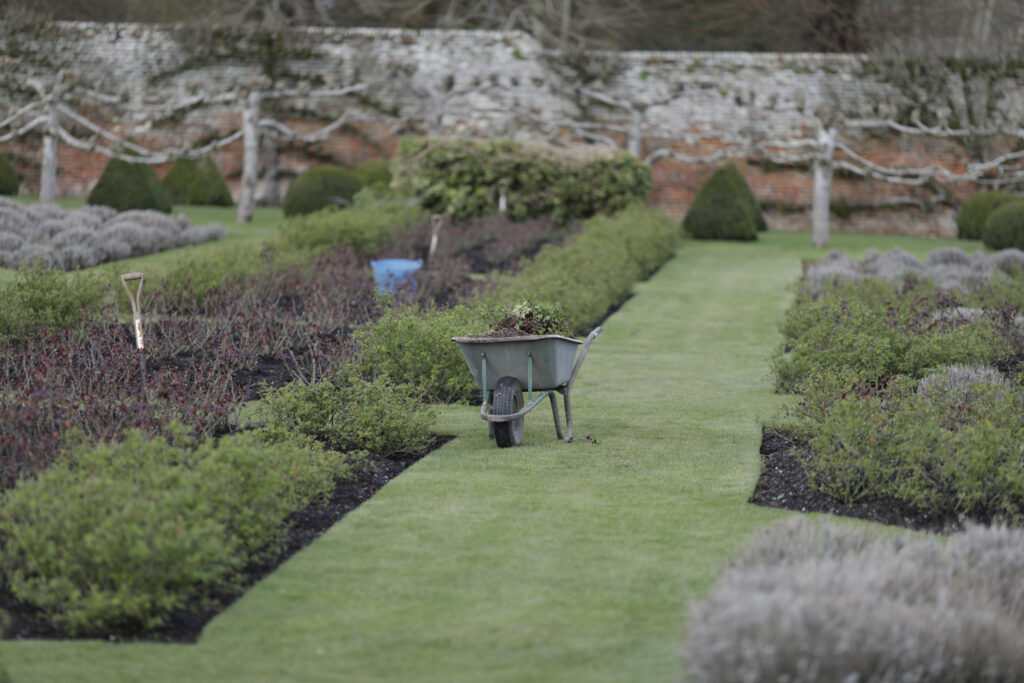 Seeking advice, he was told in no uncertain terms that, ‘he would either have to double the size of his herd, or get out,’ Philip tells me. ‘So he got out, and opened the house to the public instead, on Derby Day in 1947. He sold tickets himself.’ It was the right decision. There is plenty of activity on the estate still, including a business park – the brainchild of Philip’s father, to replace the jobs lost by the ending of large-scale agriculture – but there is a determination that the house must do its part to support its own survival.

Philip’s aware that one day ultimate responsibility for that will be his, but for now he spends much time living and working in London. He’s engaged in a ‘slow-motion passing of the baton,’ he says, though he’s quick to point out that continuity is ensured by a day-to-day management board, established in 1991, that includes senior staff alongside family members. The challenges they face are ever-changing. Situated at the confluence of the Medway and Eden rivers, flooding has always been a threat to Penshurst, but climate change as already led to observably higher water levels, more frequently, than last century; as we spoke the spectre of COVID-19 was just beginning to raise its head as a threat to the tourist industry globally. 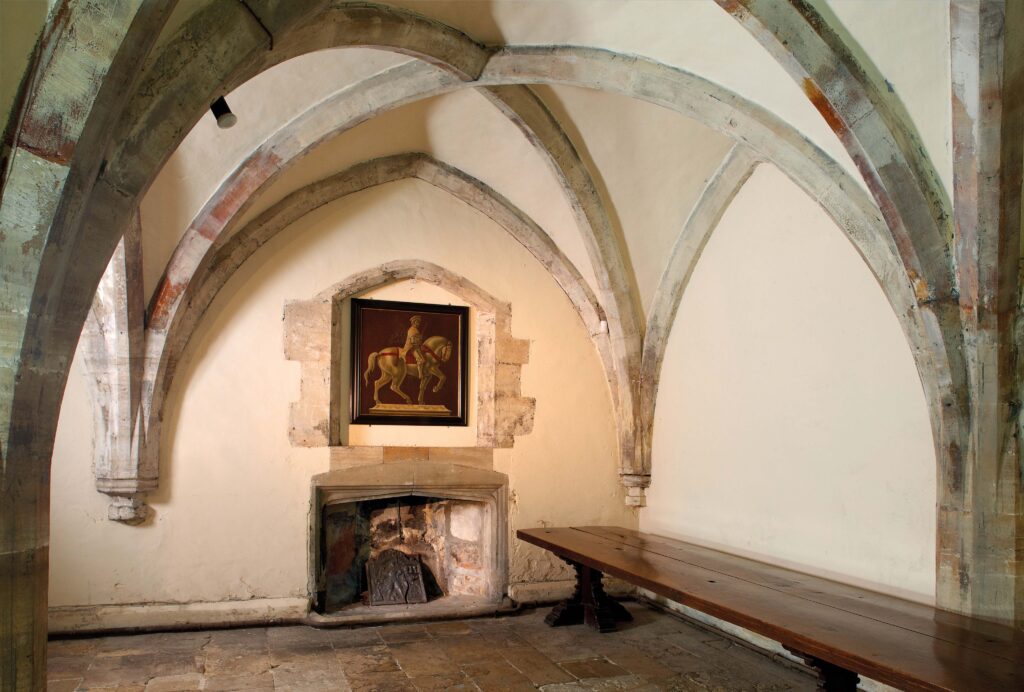 But life goes on and at Penshurst there are no quiet days. As we emerge from the crypt Philip needs to rush off to a meeting with the Environment Agency, who have a called surprise routine inspection. Observing that there is a lot on, even on a day that the site is closed to the public, Head of Events, Lucy, who’s showing me out, recalls a film shoot with Terry Wogan, the recovery of some escaped sheep, an engagement party in the Baron’s Hall, and a charity rounders match, all on the same sweltering day only a few years ago. I feel I need a cup of tea myself after all that, and thankfully we end our tour in the Porcupine Café, the house’s restaurant, named for the Sidney family crest. Like a porcupine, I reflect, Penshurst at first glance can give the impression of being something larger than it is, forbiddingly armoured and defended. In reality porcupines are mild-mannered and modest, and appropriately the longest-lived of all rodents. I wonder if they write poetry…

Become a member today and look forward to visiting 300 of our member houses, including Penshurst Place. Members can also read our quarterly magazine online and in print, and enjoy regular online lectures about our member houses. 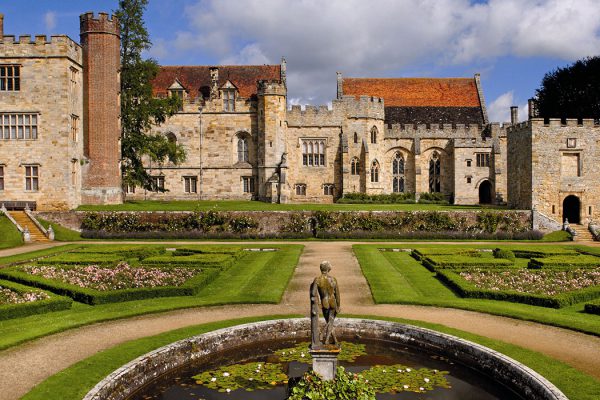