News from our housesSustainability18 May 2022

Lincolnshire’s Doddington Hall & Gardens is delighted that ‘No.1 Chestnut Avenue’ has been chosen as part of a nationwide network of 70 Ancient Woodlands (or Trees) to be dedicated to The Queen in celebration of the Platinum Jubilee.

The Queen’s Green Canopy recently announced the network of 70 Ancient Woodlands and 70 Ancient Trees across the United Kingdom which will form part of the Ancient Canopy to celebrate Her Majesty’s 70 years of service. The initiative was launched by His Royal Highness The Prince of Wales, who is Patron of The Queen’s Green Canopy, under one of the Ancient Tree dedications – the old sycamore located at Dumfries House in Scotland.

‘It has a girth of 35 feet, placing it amongst the biggest in the country. The three trees are thought to predate Doddington Hall (built in 1595) and likely to relate to a previous house onsite, making them at least 450 years old. They are still very productive despite the great age and the fact that they are twisted and contorted due to a viral infection. 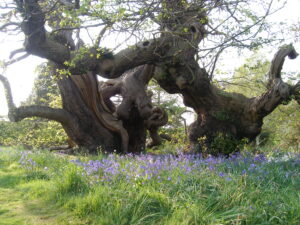 ‘As a child, my two sisters and I had ‘tree houses’ in each of the three trees, and my Grandfather Ralph Jarvis made signs saying Chestnut Avenue No. 1, 2 and 3, hence the name! There are a number of family pet graves under the tree, we are not sure how long that tradition has endured. The leaves
come out quite late and the spring bulbs underneath it each year are spectacular.’

Established over hundreds of years, the chosen woodlands and trees represent the diverse canopy of the four nations, it is a celebration of our living heritage. All the woodlands and trees have a story to tell. Some are famous specimens and others have a local significance. These ancient natural spaces hold significance and meaning for so many people in many different ways. They are symbols of community pride, places to connect socially and vital spaces for health and wellbeing activities.

By sharing the stories behind the ancient woodlands and trees, as well as the incredible efforts that are made to protect them, The Queen’s Green Canopy aims to raise awareness of these treasured habitats and the importance of conserving them for future generations. 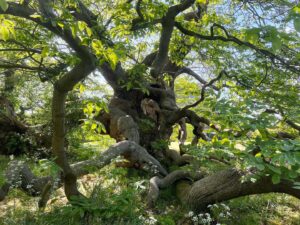 You can see the magnificent character of No.1 Chestnut Avenue at Doddington Hall during normal garden opening times. Garden admission applies.