Whilst many Historic Houses properties are famous in their own right, they’re often best recognised as the stars of some of the biggest film and TV shows produced in the UK. From Castle Howard’s first appearance as the fictional Brideshead and Highclere Castle’s starring role as Downton Abbey to the interiors of Knebworth House and Wilton House, which have doubled for interiors of royal palaces in countless dramas and films, our places have been on screens in over 180 countries across the world.

Filming at Historic Houses places brings a wealth of benefits for all involved. The local economy, which sees a boost during the filming process as hundreds of cast and crew descend on nearby towns and villages, as well as ‘location pilgrims’ who visit after the footage has aired. The houses themselves benefit from increased media attention (including additional footfall), revenue from filming and the excitement of having famous faces in their homes. Most importantly, the public gets to enjoy some of Britain’s most famous country houses and stately homes on their screens!

“Apart from having the pleasure of seeing Aidan Turner topless which would warm the hear of any woman,  Poldark using Chavenage to play the part of Trenwith for five seasons was a hugely positive experience.  The obvious being the much needed revenue from the location fees, though there were others.  Teletourism is a new buzz word and having had a major production filmed in a house makes a wonderful trap line on any advertising campaign.  We have picked up many groups, especially the small bespoke tours for fans of particular programmes.  We have also benefitted from the Art Department’s requirements, we have new gravel, the gutters and down pipes were painted 7 times in five years, the panelling in the house was French polished.  On a filming day, very often there were well over 100 persons on site, with trips to our local towns to pick up supplies and fuel, there was no doubt a benefit to the local economy.” – Caroline Lowsley-Williams, Chavenage House 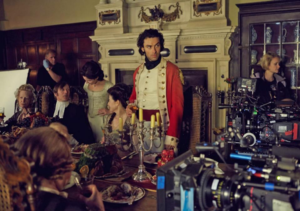 The BBC’s most-watched drama over Christmas 2021, A Very British Scandal, centred on the divorce of the Duchess of Argyll and featured Inveraray Castle, the seat of the Duke of Argyll, as a core filming location.

“A Very British Scandal was filmed at Inveraray in lockdown 2020. We were contacted by the production company who were planning a follow on to the success of A Very English Scandal. They had already decided on using the story of Argyll vs Argyll, the scandalous divorce case that gripped the country in 1963, between the Duke of Argyll and his third wife, Margaret. After a few recces the production company chose the exterior of the house and some of the grounds including the walled garden and ruined green house. The local economy benefits from filming with the hotels and B&Bs being used as well as local shops and restaurants.” – Eleanor, Duchess of Argyll 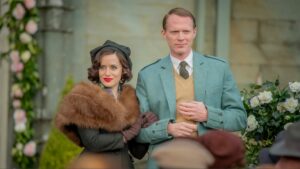 Claire Foy and Paul Bettany as the Duke and Duchess of Argyll at Inveraray Castle. Copyright: BBC Media Centre.

Castle Howard highlighted their illustrious screen history in their 2022 exhibition, Castle Howard On Screen: from Brideshead to Bridgerton. Whilst many recognise Castle Howard from the iconic Granada adaptation of Brideshead Revisited in 1981, a new generation have been captured by the castle’s role as the home of the Duke and Duchess of Hastings in the hit Netflix series Bridgerton, 40 years later.

The exhibition highlights the stately home as a key location for filming and TV and the ways such projects benefit the Estate, local area, and travel sector. While income from location fees is directly fed into the restoration and management of the House, Gardens and wider Estate, Castle Howard’s famous screen appearances bring an increase in screen tourism to the area while diversifying the audiences that engage with heritage and culture. – Laura Saxon, Castle Howard