At Home with Peter Frost-Pennington of Muncaster Castle 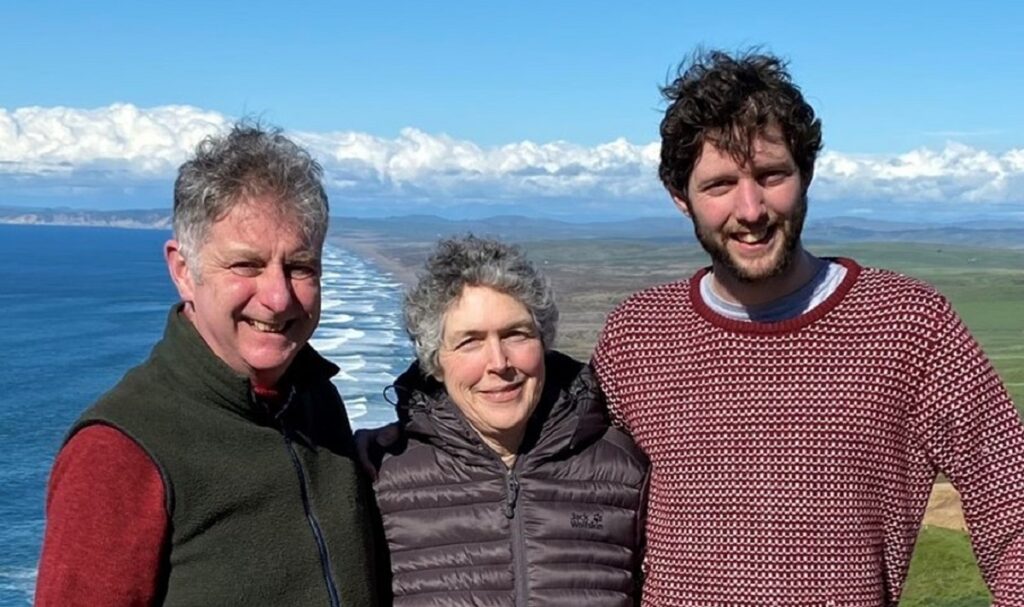 Muncaster Castle has been held by the same family, the Penningtons, for at least 800 years and probably much more. They’ve played their part in defending the borders against the Scots over the centuries –family folklore tells of a Sir John Pennington offering sanctuary to Henry VI in the 1460s as he fled from defeat at the hands of his Yorkist enemies. So pleased was ‘Holy King Harry’ with his welcome that he gifted his Venetian glass drinking vessel to Sir John along with a prophecy: ‘as long as this bowl remains unriven, Penningtons from Muncaster never shall be driven.’ Known since as ‘The Luck of Muncaster’, the glass is still kept hidden away and is our most prized possession. No one wants the bowl to break on their watch!

It was the 1st Lord Muncaster who, on inheriting the castle in the 1780s, transformed the castle from a crumbling fortress into a home in which to entertain in style, complete with a magnificent octagonal library, an orangery, sash windows and the obligatory folly. Further improvements were made in the nineteenth century, and the ‘below stairs’ set up still bears the imprint of Victorian morals – including what domestic-architecture expert Peter Brears calls a, ‘bisexual bread oven’ that could be worked by either a male or female baker but which, by a curious combination of doors, ensured they couldn’t consort with servants of the opposite sex. 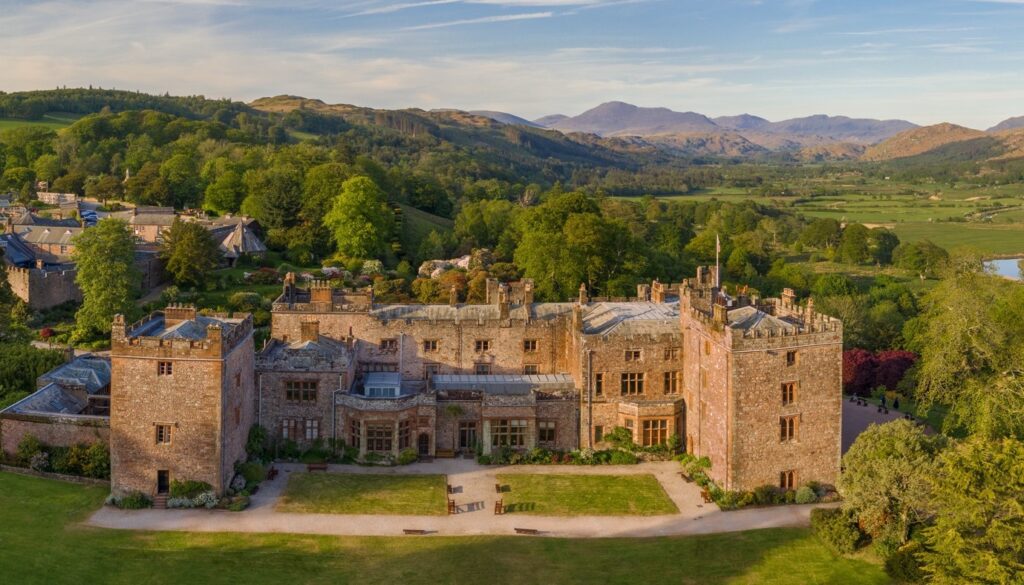 My wife Iona, great-granddaughter of the last Lord Muncaster’s first cousin and heir, came to live in her grandfather’s house with her parents in the early 1980s. Our three children are the first to grow up inside the castle’s walls since the mid nineteenth century. Like Iona’s father Patrick, who also married into the family, I am a Scot. We each achieved by love an occupancy of the castle that the Bruce and Black Douglas failed to do by force of arms (though we proudly fly the Union Flag from the battlements). 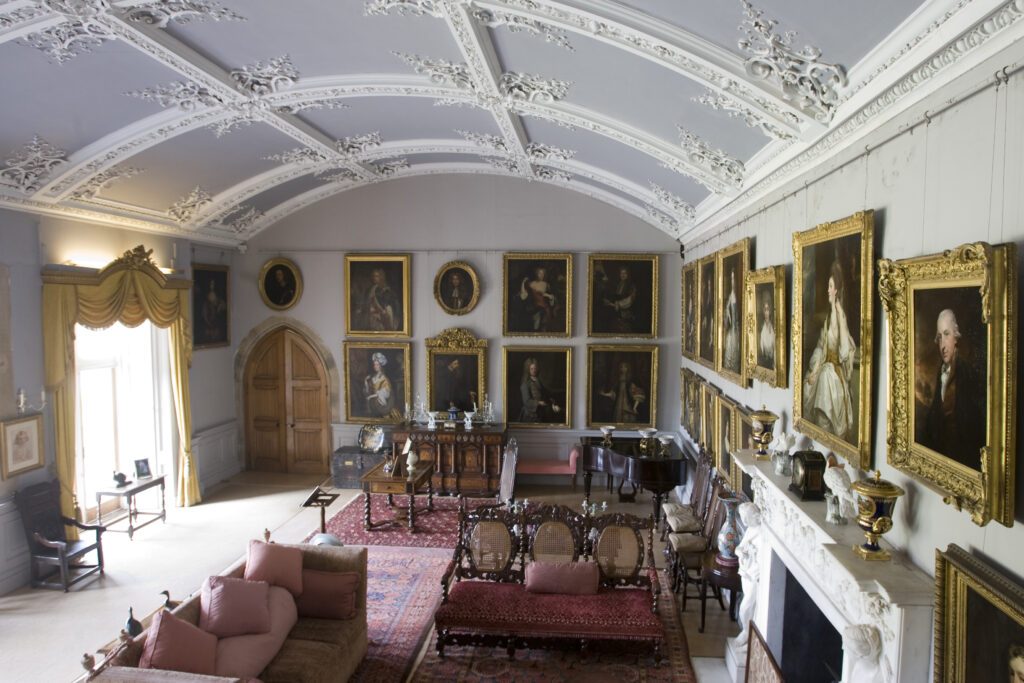 In the 1980s the castle was losing £50,000 a year. With help from Iona’s parents and our loyal, hardworking staff and volunteers Iona and I have managed to stem the losses and even make a small surplus, which we re-invest. By the late 1990s we managed to re-roof the castle as part of our ‘Third Millennium Muncaster’ project, which included rejuvenating the bird gardens and mini zoo, set up in 1968 when Muncaster first opened regularly to the public.

The bird gardens have become one of the world’s leading owl visitor centres (a trend we were on long before the Harry Potter books popularised these wonderful birds). Our Hawk & Owl Centre, now based in the old kitchen walled garden, offers daily flying displays highlighting our conservation work with raptors of all kinds – especially vultures, which are desperately in need of help in the wild and whose reputation suffers from an unfairly bad press. 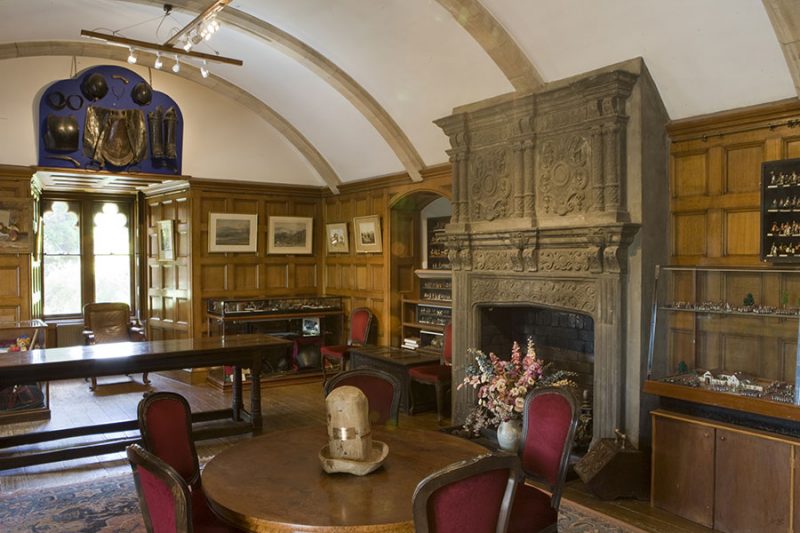 Vultures aren’t the only things here with a frightening reputation. Muncaster is reputed to be one of the most haunted castles in the kingdom. Our Halloween activities have entertained visitors for many years and it’s now our most important festival. We organise evening ghost tours, host spooky cabarets in a big top on the lawns, and create a ‘scary maze’ which doesn’t disappoint. But whatever the time of year, there is always some special event in the offing. The original ‘Tom Fool’ was our sixteenth-century entertainer Thomas Skelton, who may have inspired Shakespeare’s Fool in King Lear, and we think we are the only castle in the world to still appoint a jester, during our ‘Festival of Fools’ each May.

Our children are now becoming involved in the running of the place in their turn. Our eldest son Ewan, a renewable-energy expert, successfully installed ground-source heating for the castle this spring. It provides a steady background temperature to help conserve the castle’s contents and is virtually carbon neutral. We’re looking forward to being warm in the public rooms for the first winter in ages this year! 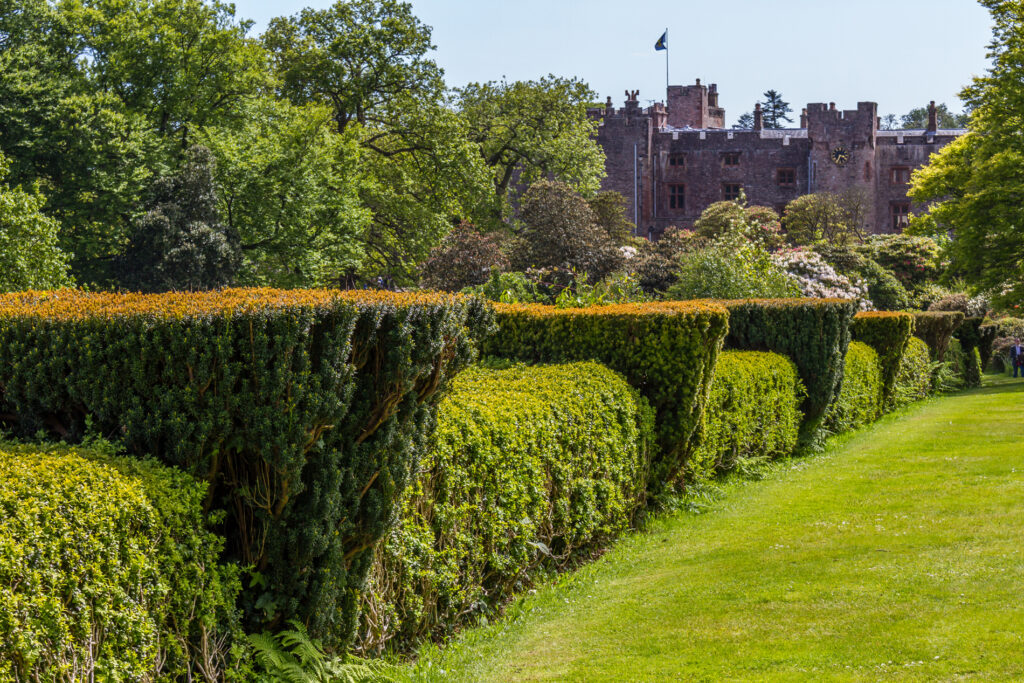 Ewan also resurrected the ‘Muncaster Luck Fell Race’ in 2012, after a gap of many years, and created the adventure course for ‘Race the Tide’, which draws participants from all over the world. After hurling themselves up hill and down dale, crossing rivers and swimming through tarns, they get a hot shower, a feed and good ceilidh in the barns of Home Farm – which have also seen performances by the likes of indie rock band British Sea Power and Poet Laureate Simon Armitage DJ-ing at the Krankenhaus festival.

Our second son Fraser is an officer on active military service, while our daughter Isla has been working with us since 2018, keeping her brothers and dad in order at the same time as helping her mother run various other bits of the business – the estate, the Pennington Hotel, and B&B accommodation in the Coachman’s Quarters. Muncaster is a matriarchal society – I used to work for my mother-in-law and wife; now it’s my wife and daughter. Although they do most of the work and I just talk about it! 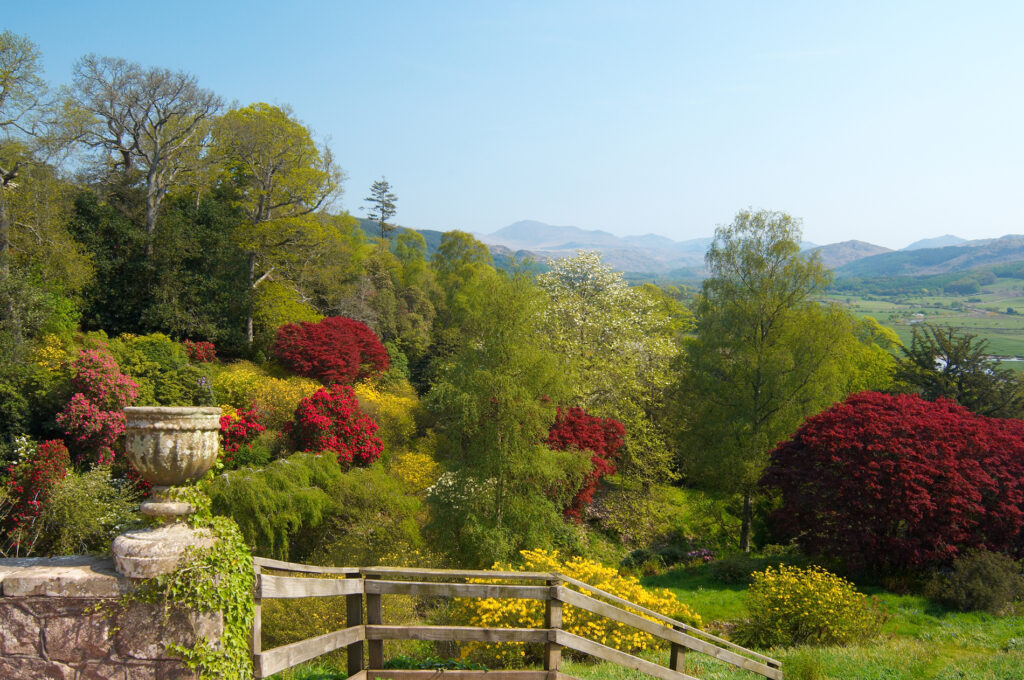 Muncaster generates lots of jobs for an isolated rural community, and we’re always adapting and changing to remain viable, but keeping on top of never-ending maintenance is tough and there is never enough money. It’s hard to compete on level terms with publicly funded institutions, even though we offer just as much public access and contribute considerably to the UK’s tourist heritage economy. One of the things we appreciate about Historic Houses is the work it does to make the case for private owners, who bear so much of the cost of maintaining our heritage and keeping it accessible from their own resources. 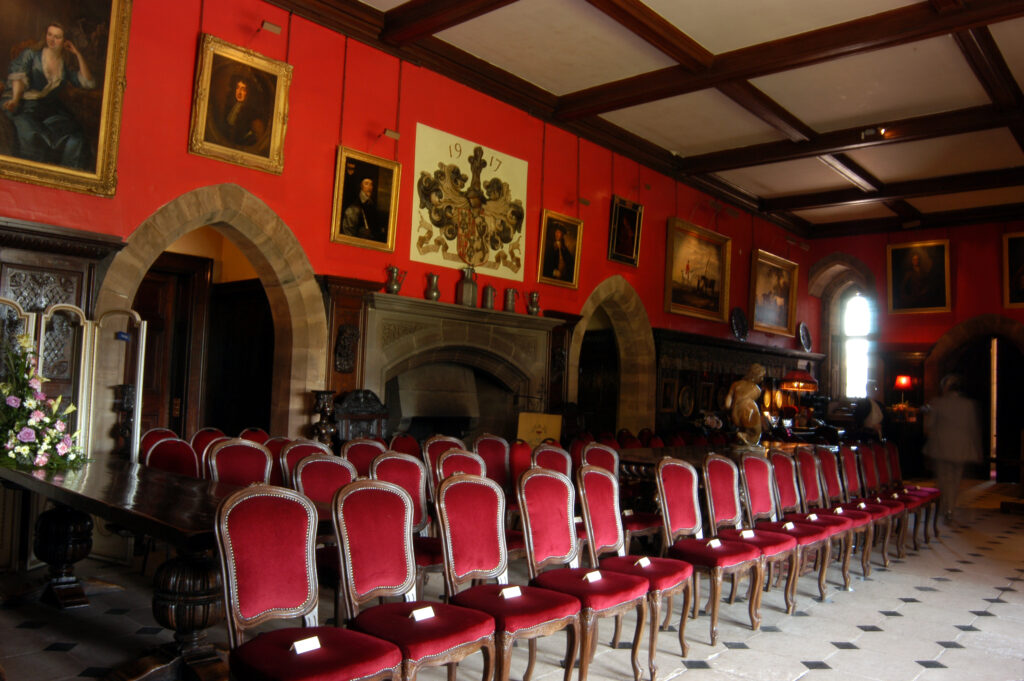 A lady today refused to enter the castle, saying she didn’t, ‘want to see how the privileged live.’ I tried to explain that we don’t live in the posh rooms that the public see. Our messy kitchen below stairs is piled high with work papers, I will probably still be working at midnight, and I’ll be on the go again by 8am tomorrow morning. The ‘privileged’ are surprisingly adept at parking cars, cleaning toilets, moving furniture, emptying buckets that catch drips in attics, greeting coach parties and unblocking sewers. But I’m not complaining – we have fun, the feedback from our visitors is almost entirely positive, and the sense that we’re both entertaining them and educating them is deeply satisfying. Now, should I go and give the Luck of Muncaster a polish?

Muncaster Castle is free to visit as a member of Historic Houses. Members can also read more articles like this in our quarterly magazine, online and in print, as well as enjoying regular online lectures about our member houses. 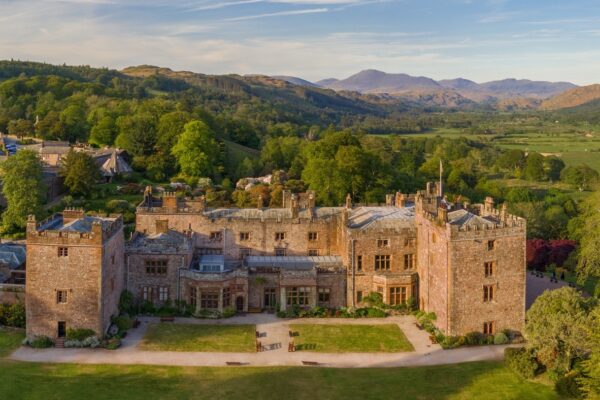 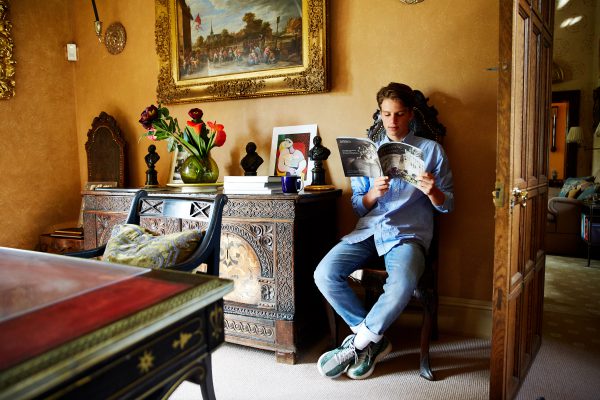