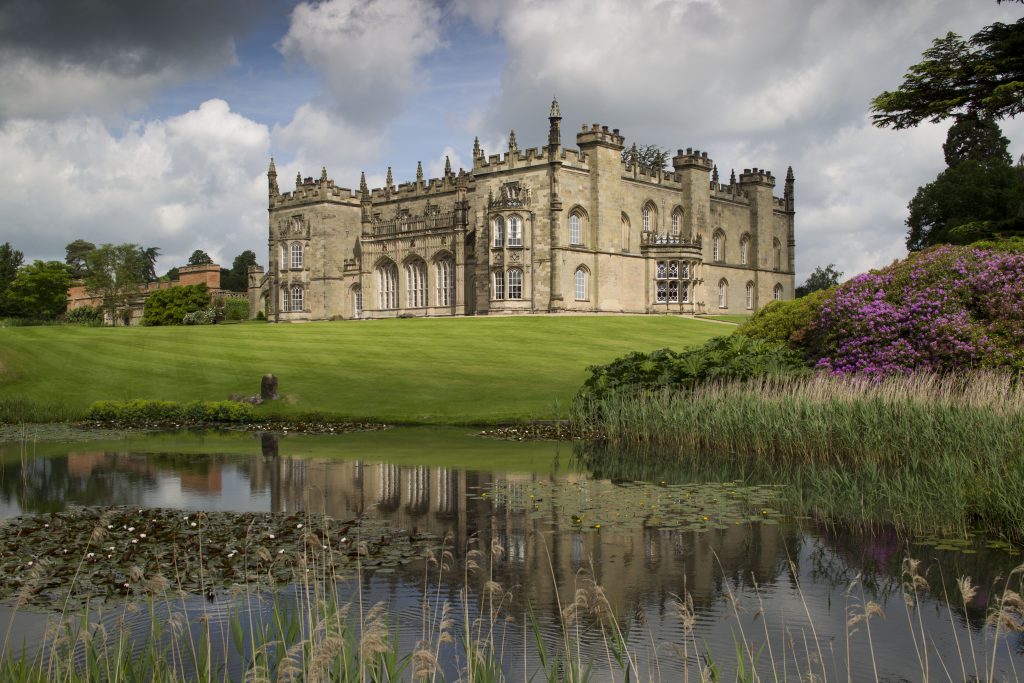 On a literary pilgrimage to Arbury Hall in Warwickshire, Sarah Greenwood, writing for Historic House magazine, found the source of George Eliot’s inspiration.

Martin Amis called George Eliot’s Middlemarch, ‘the greatest English novel.’ Her fame and influence show no sign of waning. The anniversary of her birth, 200 years ago this November, drew me to Arbury Hall in Warwickshire, with an audio book of Middlemarch (her sixth novel) playing on my headphones and a paperback Scenes of Clerical Life (her first) tucked in my suitcase. Coincidentally the builder of Arbury, Sir Roger Newdigate, celebrated his tercentenary this year – that too has been marked at Arbury, today home to James, Viscount Daventry, and his wife, Georgia. With their three children away from home at first jobs and university, the quiet house is a sanctuary wedged in a tangle of motorways in the busy West Midlands. 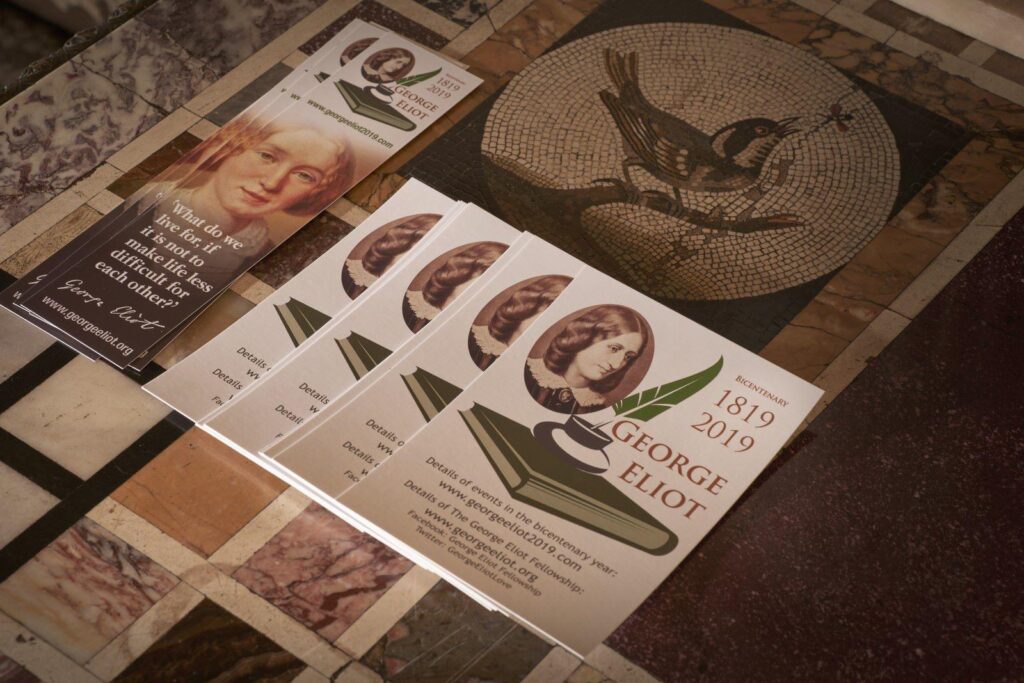 My first stop is South Farm, where Mary Ann Evans (Eliot’s real name) was born on 22 November 1819. Today this lovely farmhouse is home to Lord Daventry’s land agent, Adam Weaver. It’s a comforting piece of continuity that Eliot’s father was also the agent to the estate when the Evans family lived here. The air of calm and permanence is not just an illusion. ‘It’s not much changed,’ explains Adam. ‘There’s a barn in the farmyard dated 1911 but otherwise it’s pretty much as it was then.’

Sir Roger Newdigate had been dead for thirteen years when George Eliot was born. The house belonged to a cousin, the owner not just of this elegant ‘Strawberry Gothick’ house but also of a substantial agricultural estate, a network of canals and a couple of coal mines. The spirit of Sir Roger is still very much in residence. He lived here for 72 of his 87 years and you can feel a strong sense of the man today. Eliot evidently thought so; in her earliest work, Scenes of Clerical Life, Arbury Hall can be clearly recognised as ‘Cheverel Manor’ and Sir Roger as ‘Sir Christopher Cheverel’. He pops up again as Sir Hugo Mallinger in Daniel Deronda. 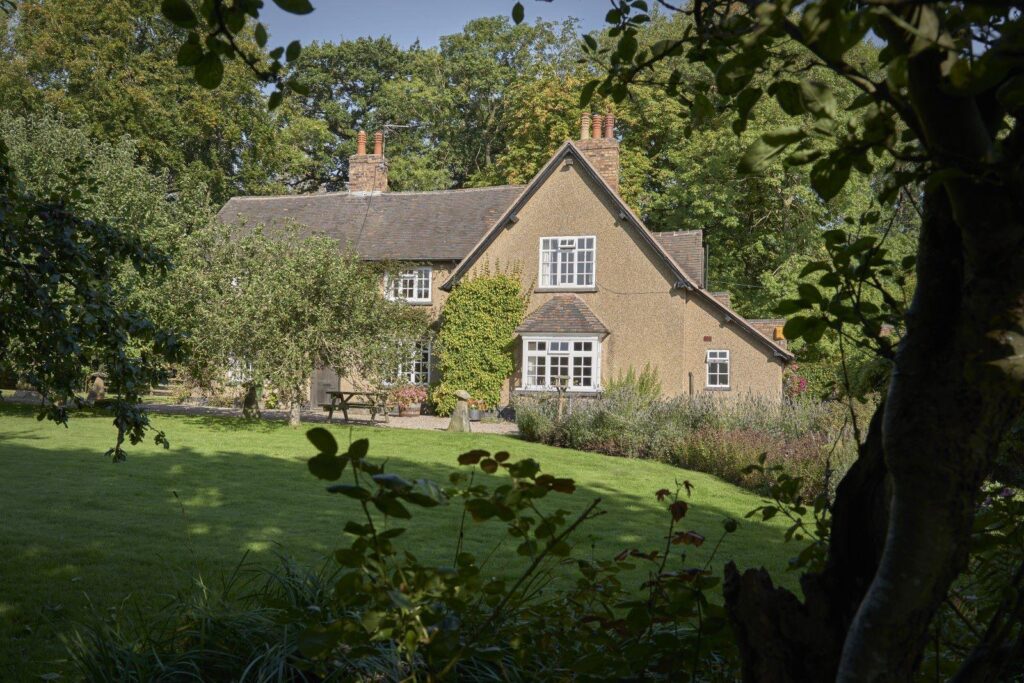 The influence of the Arbury estate on the young George Eliot was profound. She must have accompanied her father on his visits here as a child and her intellectual curiosity was fed by being allowed into the library by the Newdigate family. By the time Scenes of Clerical Life was published, George Eliot was 36. Arbury and her Warwickshire childhood were far behind her. Calling herself Marian, she was living with the philosopher and critic George Henry Lewes, who encouraged her to write novels. She adopted her male pseudonym and set about exploring contemporary social issues. Even though she was now living in London, it was to the West Midlands, to Arbury, and to Sir Roger Newdigate that she returned for inspiration in her writing.

The Newdigate family wealth originally came from the Tudor and Stuart law courts. When Sir Roger inherited in 1734 (aged just 14) he was able to afford a fashionable Grand Tour of Europe. He was a contemporary of the antiquarian Horace Walpole. Like him, he had a passion not for the Palladian villas of Italy but for the medieval Gothic masterpieces of Germany, France and England. His exquisite drawings, particularly of Westminster Abbey, had a direct influence on his later building work at Arbury. Scholars are divided on whether Walpole’s Strawberry Hill or Newdigate’s Arbury are the most influential buildings of the eighteenth-century Gothick revival but the metamorphosis of the Jacobean house at Arbury into an airy Gothick palace was certainly an architectural revolution. Eliot thought that it had, ‘the fervour of genius.’ 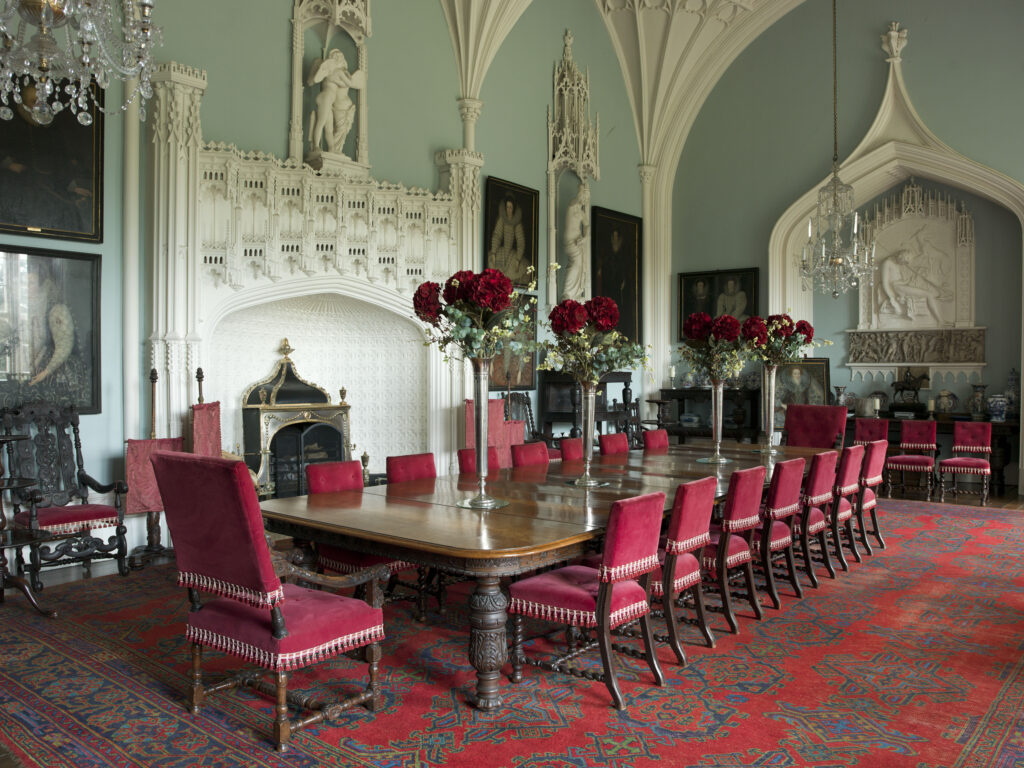 The Drawing Room at Arbury Hall

Walking through the front door, the house immediately displays its Gothic credentials. Like many English houses, it is built on the foundations of an Augustinian priory and the little-altered cloisters preserve their medieval air. In the new interiors, Sir Roger, advised by local architect Sanderson Miller, took the soaring vaulting of Gothic cathedrals as a model, creating, between 1748 and his death in 1806, a series of astonishing and beautiful rooms.

Stepping into the saloon my eyes were drawn immediately up to the fabulously ornate Gothick ceiling, whose cusps and crockets have a wedding-cake crispness.

Opening the shutters in the dining room floods sunlight from the lines of arched windows into the highest corners of the elaborate vaults and statue niches. Looking on are the portraits of a colourful collection of Newdigate relatives: Mary Fitton, perhaps the Dark Lady of Shakespeare’s sonnets; an earlier Sir Roger, Lord Chief Justice under Charles II; Captain Fitzroy, Speaker of the House of Commons in the early 20th century; Sir Roger Newdigate himself. 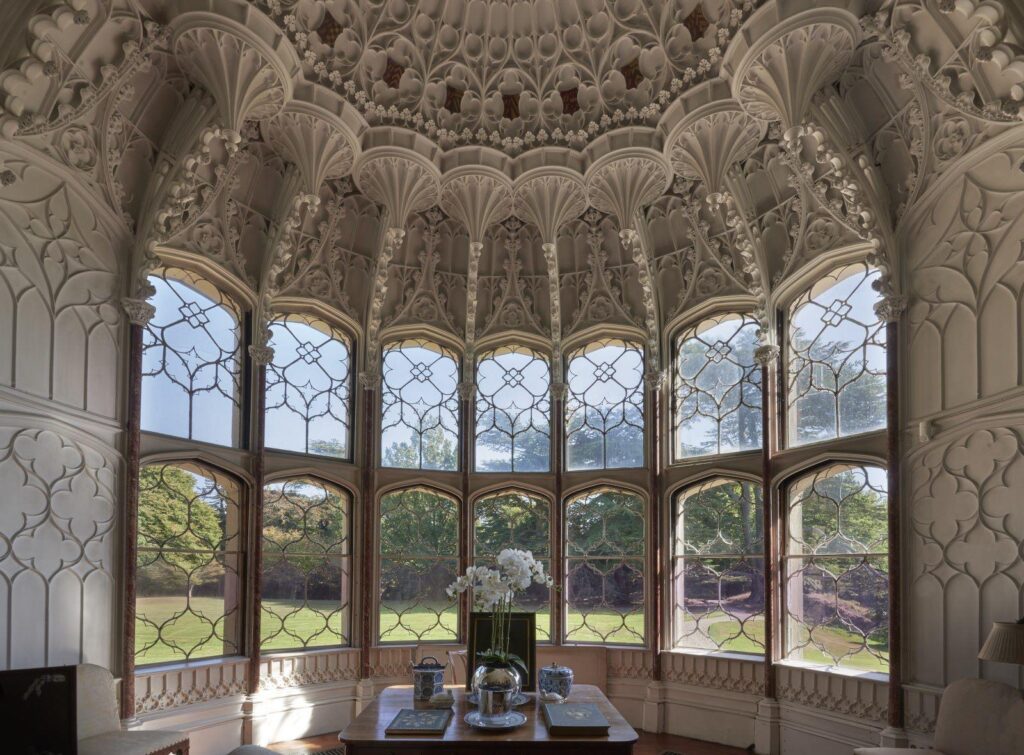 Reading George Eliot’s novels, there are influences of more than just the architectural originality of Sir Roger. The landscape of the estate plays a strong role in all her books, particularly Adam Bede, The Mill on the Floss and Felix Holt.

She loved to travel, as her characters often do, inspired perhaps by the Grand Tour collection of old masters, sculpture and medallions that today still fill the interiors at Arbury Hall. When the profits of The Mill on the Floss freed Eliot and her partner George Lewes to take their first trip to Italy, their itinerary exactly followed Sir Roger Newdigate’s Grand Tour travel plan.

George Eliot’s awareness of politics and industrial change were also fostered at Arbury. Sir Roger Newdigate’s determined adoption of Gothick over Palladian was a subtle expression of his allegiance to the Tories. His rejection of the architecture of classical palaces like Wentworth Woodhouse and Houghton Hall was also a rejection of the ruling Whig grandees who built them. Horace Walpole called him, ‘a hot-headed bigot, and formerly as warm a Jacobite.’ Sir Roger was no stick-in-the-mud, though. Arbury is located at the heartland of the Industrial Revolution. Successive generations of the Newdigate family developed coal mines and quarries on the estate, created a network of canals that linked vital freight routes and sponsored the manufacture of firearms in Birmingham. The young Eliot experienced at first hand the convulsions that were changing the countryside forever. 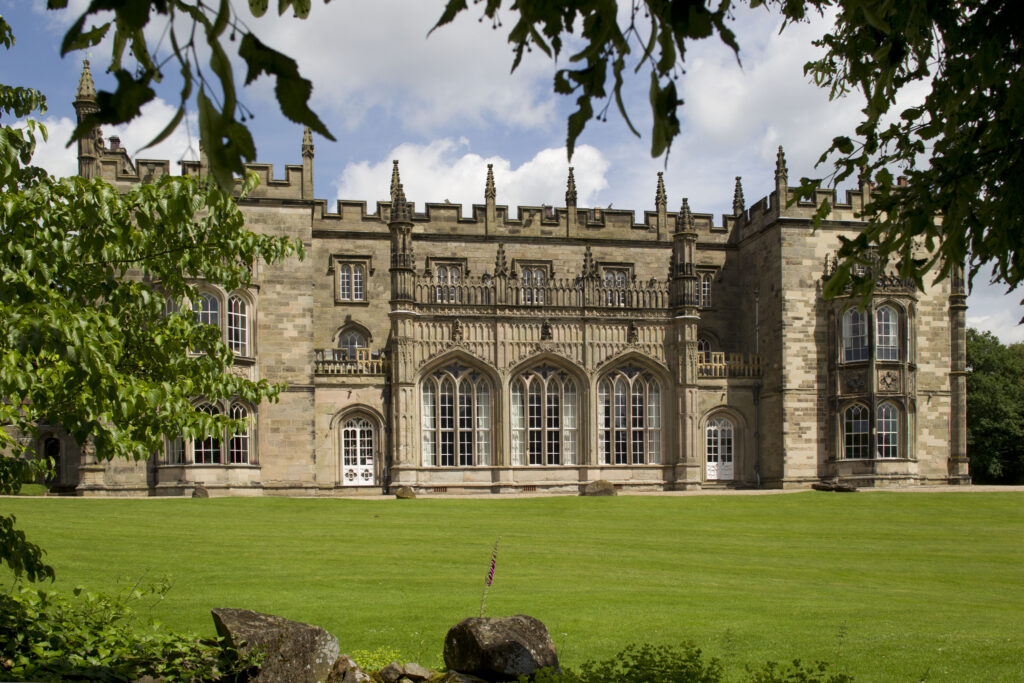 As I left Arbury the early winter sunshine illuminated the genesis of the novels I’d enjoyed on the way; the rural beauty of the unchanged Arbury parkland; the abandoned canals that fringe the gardens; the quarry at Griff where coal miners once worked (and where a young Eliot lived for a time). The synthesis of literature, art, architecture and industry make Arbury’s story one for the ages. Go and read it for yourself!

There is no hard-and-fast rule about when to spell ‘Gothick’ with and without a ‘k’. Style is a largely a matter of personal choice and different writers sometimes use the variants interchangeably, while others ascribe distinct meanings to each.

In this article we have decided to use ‘gothick’ to describe the very particular eighteenth century style, popularised by Horace Walpole at Strawberry Hill and very much in evidence at Arbury, that focused on the details and décor of perceived medievalism, while playing fast-and-loose with other elements of the design and philosophy of medieval buildings and caring little for historical accuracy. 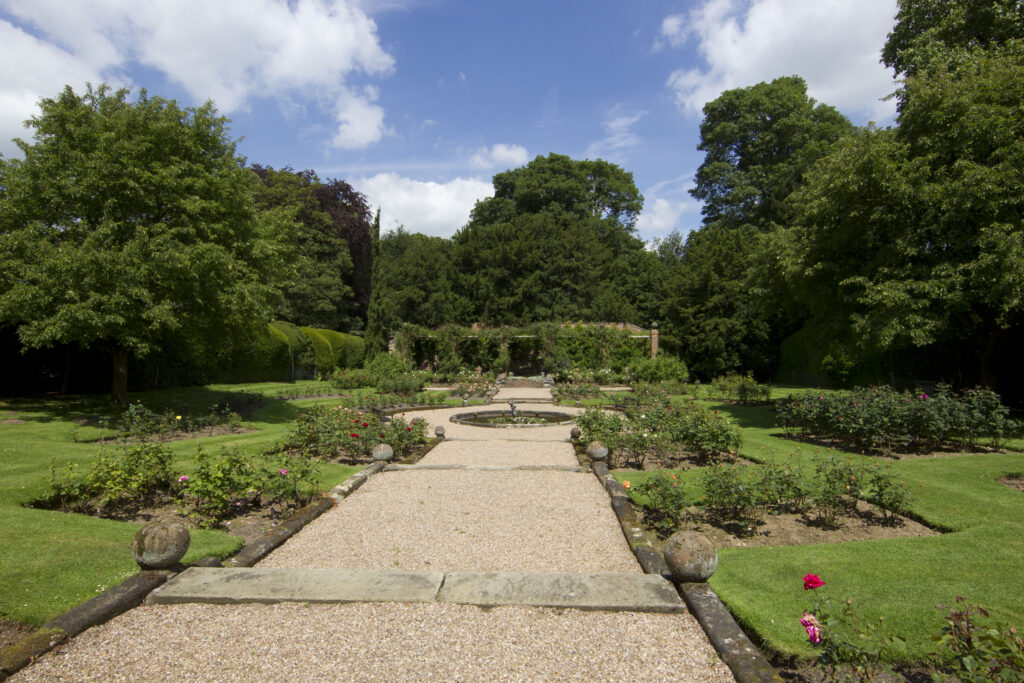 By contrast we’ve used ‘gothic’ to describe both actual medieval buildings in the ‘pointed style’ first introduced by Abbot Suger at St Denis in the twelfth century, and the Victorian revival of that style – often accompanied by the imagined morals and methods of the masons who first employed it – so eloquently described by figures like Augustus Pugin in his Apology for a Christian Architecture.

Arbury Hall is free to visit as a member of Historic Houses. You can visit this and 300 other member houses for free by joining us. As a member, you’ll also be able to read our quarterly members’ magazine and watch live and recorded online lectures about our member houses. 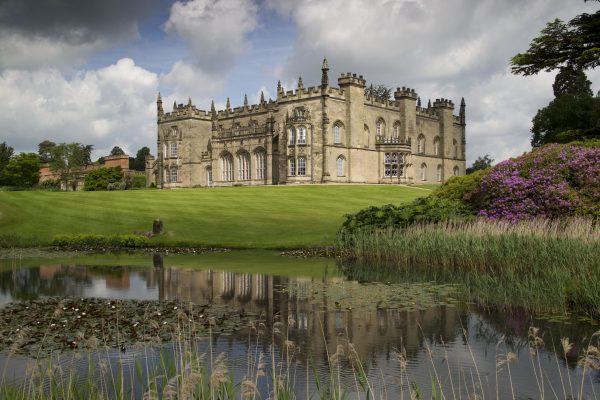