Grade I house, attributed to Inigo Jones, built in 1635 for Sir Benjamin Rudyard, poet, lawyer and Member of Parliament. 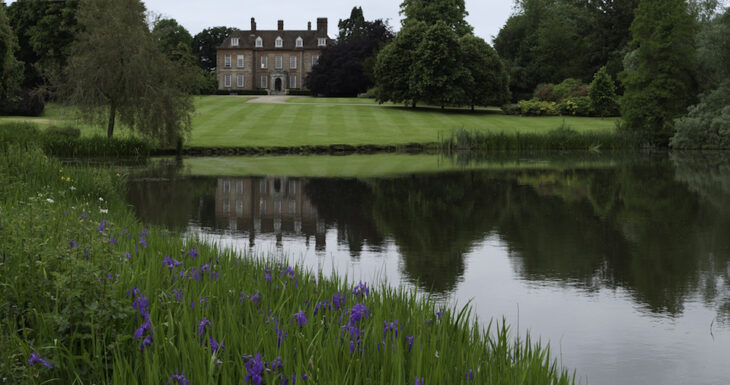 West Woodhay House was built in 1635 by Sir Benjamin Rudyard. Benjamin’s great friend was the 8th Earl of Pembroke and as a frequent visitor to Wilton he would have seen Inigo Jones’s masterpiece and it is thought that he used Jones to build West Woodhay.

Henry Henderson, brother of the 1st Lord Faringdon purchased the house in 1920. In 1948 his grandson Johnny Henderson and his wife Sarah divested the house of extensive Victorian additions to reveal the perfect Inigo Jones house (original build 1635) that it is today.

On the east side of the house tall limes are the remains of the original avenue that once stretched across a small valley below the house and up over the hill to where the new church of St Lawrence stands.

South of the house the view is more open and sublime, rising gradually to the 200ft chalk wall of Downs a mile away. At James Russell’s suggestion groups of Hornbeam were planted and intrusive hedges were removed from the middle distance to create today’s mesmerizing views.

In the corner of the east and south aspects lies the footings of a small church reputedly built by Vanbrugh but demolished in 1885. Newly created in 2018 it is now the delightful Italian Garden. Built sympathetically in the foundations of the old Vanbrugh Church, this garden is a tranquil area with a Mediterranean feel, entertaining work by William Pye and a reflective water feature of slow flowing rills.

In other gardens one might expect to slip through the door at the end of the border and into the kitchen garden. At West Woodhay it is necessary to go out of the main gates across a road and through another gate. Work started in 1999 on the complete replanting of the walled garden to Veronica Mackinnon’s design incorporating two magnificent fruit cages. The glass and steel sculptures in both the blue and white garden and the walled garden are the work of Neil Wilkin.

Shortly after the current owners (Harry and Sarah Henderson) took up residence in 1994 work started on a new arboretum, themed on bark and berry, and extending the lakes directly to the south of the original lake in front of the house.

The new Jubilee Garden, created in 2012 and situated to the east of the walled garden, deserves a mention. The five circles of weeping trees and the six large stones mark the London Olympics and sixty years of the Monarch and the owner – Thrown and Birth. These gardens were again advised by Veronica Mackinnon.

Tickets £28 inc tea or coffee with cake and biscuits.