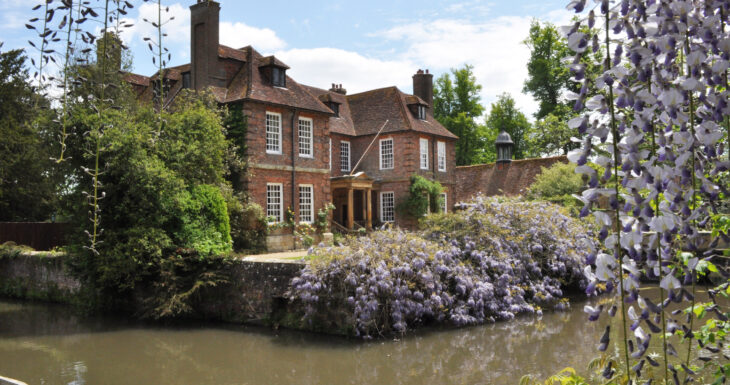 The house standing today at Groombridge Place was built in 1662, replacing an earlier moated castle on the site. Much of the house, along with the bridges and moat gates, were designed by renowned architect Sir Christopher Wren who rebuilt London after the Great Fire and is most notable for redesigning St Pauls cathedral.

The first recorded owner of a Manor at Groombridge was William Russell, a Baron, who was granted Lordship of the Manor in the early 1230s. Many different families have lived in the house since that time, including the Earls of Clinton and the Earls of Dorset. The most famous resident is Thomas Sackville, cousin of Elizabeth I and Lord High Treasurer of England from 1599 to 1608. The house as we see it today was rebuilt by Philip Packer, a Courtier of Charles II, who was also responsible for laying out the formal gardens. They were designed with help from renowned horticulturalist John Evelyn, and the grid layout has remained unchanged since it was first devised in the 1670s.

The Groombridge Place estate is approximately 250 acres and includes a canal, vineyard, arable farmland, and area of ancient woodland. The canal is a diversion of the river Grom (which flows from Tunbridge Wells to the Medway), created to feed the moat, and the village millpond. There was a working farm on the site until 1970, and the buildings in the courtyard area of the site- the restaurant, shop and office – are all original farm buildings, some dating back to the 1600s. The gardens, canal and forest have been open to the public since the 1990s.

Groombridge Manor was voted loveliest House in the South East of England by readers of the Daily Telegraph and Country Life. The Groombridge Place estate has connections with world-famous novelist Sir Arthur Conan Doyle, creator of detective Sherlock Holmes. Conan Doyle was good friends with the sisters Sophia, Louisa and Eliza Saint, who lived at Groombridge Place during the late 1800s. He visited the estate often, using it as the setting of his last Sherlock Holmes novel – ‘The Valley of Fear’- although renaming it ‘Birlstone Manor’ for the purposes of the book. The house and gardens were also used for the home of the Bennet family – Longbourn House in Jo Wright’s 2005 film adaptation of Pride & Prejudice starring Keira Knightley.